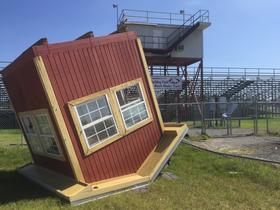 Panhandle schools hit hard by Hurricane Michael are re-opening, and many students are experiencing a “new normal” as they return. Some districts are having to get creative to get all students in the classroom.

Two North Florida Counties, Jackson and Calhoun, returned to school this week. And the districts’ Superintendents both described a challenging road to recovery when it came to getting classrooms ready.

“It’s taken some creative thinking to make this work, but it’s been a team effort and I’ve been very thankful for that,” Yoder said.

Yoder says the schools are, for the most part, fully staffed. He “marvels” at his staff’s ability to bounce back.

“Whenever I saw the carnage after the storm and the thing that we were facing – I would not have put a date that we would be starting back on November 1st,” Yoder said.

And some of the same “creativity” involved in getting kids back to school safely is applied in making sure the transition isn’t too rough on families.

“We do not want homework sent home until all power is on, we feel like that would be an unreasonable thing to do,” said Jackson County Superintendent Larry Moore.

In the week leading up to schools re-opening, Moore was trying to ensure students got an extra chance to eat.

“We currently have free lunches and free breakfasts, and we met with some USDA representatives Monday, and we’re looking to an evening, afternoon and evening snack and feeding type program so we can assist even more with nutrition,” Moore said.

Most public schools in Bay County, home to hard-hit Panama City, are set to re-open Monday. Others, the district says, are to be open no later than the following week.

To house all students, some schools are having to split schedules. For instance, Arnold High School and Surfside Middle School are sharing on the middle school’s campus. Arnold High students will occupy the school from 7 a.m. until noon, and then Surfside Middle holds classes from 1 p.m. until 6 in the evening.

Fielding many questions from parents on social media, the district posted some answers to frequent inquiries, like “My child is going to middle school and will be getting off the bus/walking home in the dark. What can I do?”

The district says it will be changing some of its bus routes to cut down on walking distance, and providing reflective gear for bus riders.

Like many counties battered by the storm, Bay had some damage to its buses. But out-of-county acts of kindness, like a donation of 20 buses from Pasco County Schools, have helped them get a plan in place.