Opioid Emergency Declaration Will Likely Have Limited Impact In Florida 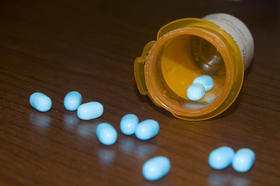 President Donald Trump has declared a nationwide public health emergency for the opioid crisis.  But the immediate impact in Florida will be minimal.

The president’s official declaration comes more than two months after he initially called opioid abuse a national emergency.  The move allows for a handful of policy tweaks but no new money.  Melanie Brown-Woofter of the Florida Council for community mental health says more attention is great, but federal authorities need to do more.

“Acknowledging that this is a public health emergency is an excellent first step, but we need resources in order to be able to move forward with prevention, with recovery and with getting folks back in—getting their lives back.”

One significant effect of the emergency declaration is physicians will be able to prescribe medication assisted treatments through telemedicine.

“In terms of the immediate impact to Florida, I don’t think mental health providers will see anything really change the way they’re doing business in the next 30 to 60 days.”

At the state level, lawmakers are pushing for opioid prescribing limits, and mandatory use of the prescription drug monitoring program for physicians.

Substance abuse experts and law enforcement officers are calling on lawmakers to bolster access to treatment for people battling opioid addiction.  The biggest focus is on medication assisted treatments.

Doctors would be limited to prescribing seven days' worth of opioids for patients with acute pain and would have to check a statewide database before ordering most prescription pain medications, under a proposal filed Friday in the state House.

'No Wrong Door' Measure Making Headway But More Work To Do

Florida House lawmakers are checking in on a 2016 measure meant to improve mental health and addiction treatment.

Lawmakers, Doctors Wrestle With How To Combat Opioid Abuse

Florida’s law enforcement, emergency and mental health workers are struggling to cope with a rising tide of opioid overdoses.  Lawmakers are looking for solutions ahead of the coming year’s legislative session.

Florida Governor Rick Scott is promising to make the opioid crisis a top priority in the coming legislative session.