On the same spring day Chinese President Xi Jinping dined with President Trump at his Mar-a-Lago estate, six miles to the south a dozen fifth graders were also sitting down to dine.

Not for lunch. For art class.

At South Grade Elementary in Lake Worth, art teacher Rebecca Hinson is introducing her students to the next art form they’ll be studying: the art of table manners.

It’s kind of like etiquette boot camp: once a week, for seven weeks, Ms. Hinson put them through the paces.

“Sit up straight. Your dress isn’t going to look good if you're slumped over like an ol' humpback.”

“Show me your fish hold.”

“Are we going to ladle towards ourselves or away?”

“Away!” exclaim the students in unison.

The kids are into it.

Do you think you know about table manners? Take our quiz and find out here

“You stab the meat, you use the knife to cut that part, then all you have to do is twist your wrist,” said 11-year-old Keontae Slaughterbeck. “That will be an easy way to get it to your mouth instead of going, like, the usual way." 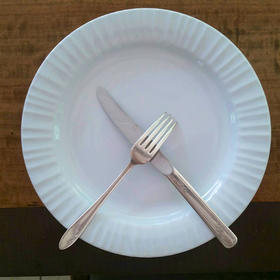 Keontae knows these etiquette skills will serve him well … at prom.

“If we take our girl to a fancy restaurant,” he said, “we’ll use the resting position if we need to get something from the car. That’s how the server knows not to take your plate away.”

Hinson started teaching formal etiquette to her fifth graders at South Grade about 12 years ago. She’d read a newspaper article about etiquette classes for students in the affluent town of Palm Beach — just across the bridge.

“There's high society all around us in this county,” said Hinson. “And there's great disparity between the haves and the have nots.”

Palm Beach County is home to many of the richest and poorest communities in Florida. The wealth gap is more like a chasm. Last school year, more than 99 percent of students at South Grade Elementary qualified for free or reduced lunch.

“I know in my heart my students are just as good as anybody,” said Hinson. “But I want to teach some of these life skills so that when people are dishing out their judgments, they can’t put them down because they don’t know what to do at the table.”

And Hinson has a lot of support.

“I think it’s very important,” said Jackie Robledo, whose daughter, Addy, is in the class.

“They may never get the chance to learn this ever again,” said Kim McChesney, whose daughter, Paige, is also in the class. McChesney said she thinks the etiquette skills will be key in the future when the students compete for internships, scholarships and job offers.

“They can go back later down the road and say they learned it from Rebecca Hinson in art class in fifth grade,” she said.

The culmination of the etiquette instruction is the High Tea. Hinson brings in her own stemware and silver to set the long white table in the middle of her multicolor art classroom. Students passed three-tiered trays of sandwiches, fruit and cream puffs.

Three dings from of a knife tapping a glass echoed through the room. Keontae was the first to give a toast.

“I’d like to make a toast to Ms. Hinson for teaching us all these table manners,” he said, glass in raised hand. “I guess that’s it!”

For the fifth graders, High Tea marks the end of elementary school. It’s a chance to say goodbye to teachers and friends in grand fashion. They were joined by honored guests: the school's newly appointed principal, Ana Arce-Gonzalez, Palm Beach County sheriff’s deputies, and, since many of the kids are from Guatemalan families, the head diplomat of the new Guatemalan Consulate in Lake Worth, Mario René Azmitia.

Azmitia told the students he learned the importance of etiquette in diplomacy school.

“This training will serve the students greatly in life,” Azmitia said in Spanish. “If you know how to dine gracefully, this says a lot about you.”

“I’d like to thank and our new principal,” said Tasha. “You’re experience here is going to be great — trust me!”

“I’d like to give a toast for my awesome class,” she said. “We’ve had so many fun memories. It’s like we’re brothers and sisters. And I’d like to thank the Guatemalan Ambassador for being here today.”

Hinson beamed at the scene.

“I’m an art teacher. I'm all about beauty,” she said. “When you sit down on a long table with white linens and shimmering silver and gleaming white porcelain and beautiful food and lovely children with fine manners — I'm in the beauty business. This is beautiful."

Do you think you know about table manners? Take our quiz and find out: