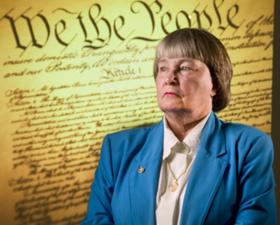 The new law changes the role of prosecutors during a Stand Your Ground immunity hearing. Before the Governor signed the bill into law, the accused claiming self-defense had to prove their claim was justified in order to avoid a trial. But, the new law shifts that burden to prosecutors during the pre-trial hearing—a change National Rifle Association’s Marion Hammer says is long overdue.

“In 2008, prosecutors and some sympathetic judges found a way to usurp the law by creating a special hearing and reversing the burden of proof and have been requiring people who use self-defense to prove they are innocent,” said Hammer. “That’s wrong. The legislature went back and fixed it.”

The new law stems from a dissenting opinion of a 2015 Florida Supreme Court decision. In the majority opinion, justices ruled the burden should stay with the defendant, so prosecutors wouldn’t have to prove their case twice.

A measure changing the state's controversial “stand your ground” self-defense law was among 16 bills that Gov. Rick Scott signed into law late Friday.

‘Stand Your Ground’ Among Bills Sent To Scott

The Florida Senate on Monday sent to Gov. Rick Scott the remaining 24 Senate bills passed during the 2017 session, including a major higher-education package and legislation to revamp part of the “stand your ground” self-defense law.

Florida Could Pave New Changes In 'Stand Your Ground' Laws

Lucy McBath is afraid many more people will die if Florida Gov. Rick Scott signs a bill making it harder to prosecute when people claim they commit violence in self-defense.

A change to the state's “stand your ground” self-defense law is heading to Gov. Rick Scott after the Senate agreed late Friday to go along with a House proposal.

The Florida Senate remained steadfast Thursday in a dispute with the House about a change to the state's “stand your ground” self-defense law.