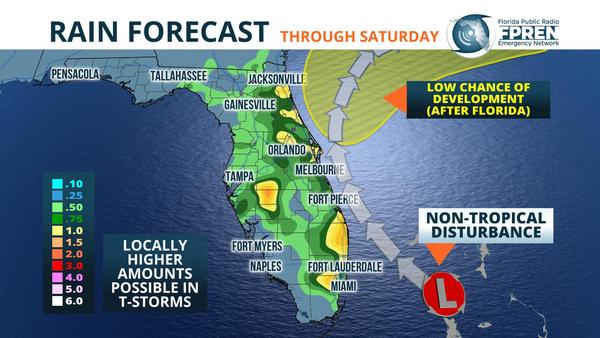 A non-tropical disturbance is expected to approach Florida Thursday and Friday, producing summer-like downpours and thunderstorms across much of the state.

The National Hurricane Center is not forecasting this disturbance to become tropical as it approaches Florida, although it does have a “low chance” of becoming a tropical depression or storm as it moves away from Florida this weekend.

A cluster of thunderstorms associated with the system was noted on satellite near the Bahamas Wednesday morning, and showers were seen on radar already marching into portions of South Florida by early afternoon. In addition to the wet weather, the National Weather Service in Miami has advised that boating and swimming conditions will grow increasing hazardous over the next few days.

5/1 @ 10 am - A Disturbance now over the NW Bahamas will bring us heavy rainfall and hazardous swimming/boating conditions over the next few days. Flooding of poorly drained areas is possible. #flwx pic.twitter.com/mHWCuVItfm— NWS Miami (@NWSMiami) May 1, 2019

The heaviest and most widespread rainfall near Miami, West Palm Beach and Fort Lauderdale will occur on Thursday, with wind gusts to 30 mph also possible at times. NOAA's Weather Prediction Center says rainfall accumulations may exceed an inch in locations near and east of the I-95 corridor from Miami Beach to the Treasure Coast. Locally higher amounts are also possible from heavier thunderstorms.

Further west, from the Tampa metro to southwest Florida, showers and thunderstorms could become locally strong both Wednesday and Thursday afternoon due to the proximity of higher moisture and lift from the disturbance. A westward advancing sea breeze will enhance the activity, which will reach peak strength near the I-75 corridor before moving offshore into the Gulf of Mexico.

Showers will also develop over parts of central and north Florida Thursday afternoon. Another round of showers and thunderstorms is also likely Friday. This second round will be most concentrated in North Florida and may occur at any time during the day. The heaviest rain in these regions will likely occur near or east of the Florida Turnpike and I-75 corridors. Daytime heating and the interaction of a weak sea breeze may enhance the intensity and coverage of the activity in some locations.

Lighter amounts of rain are expected in the Florida Panhandle from this weather system, although scattered showers and thunderstorms are also possible, especially on Friday afternoon. Drier air is projected to sweep in the from the west and carry the deeper tropical moisture away from Florida on Saturday. However, an approaching front may increase the chances of showers and thunderstorms again by Sunday, particularly across the northern third of the state.

The arrival of this system is a gentle reminder that the Atlantic Hurricane Season is fast approaching. The National Weather Service will hold their annual “Hurricane Preparedness Week” during the week of May 5th, and although the season doesn't officially begin until June 1, tropical storms can occur well before that date.

The Forecast Many Meteorologists Don't Want You to See

Fewer hurricanes are expected this year than the last two seasons, according to renowned researcher Dr. Phil Klotzbach of Colorado State University. However, both of those seasons far outperformed expectations.

Even Phil doesn't have much confidence in his forecast this time of year.

“So our skill in April is modest, and that's because the hurricane season doesn't start until June and then doesn't ramp up until August. So obviously there's a lot that could change in the atmosphere and ocean,” he says.

Hurricane season may be about three months away, but the city of Tampa already has a plan to help residents after a storm.