Nobody Knows How Many Mexican-Americans Served In Vietnam. A New Play Tells Their Story

"Ring of Red: A Barrio Story" relies on oral histories to tell the rarely heard stories of Mexican-American veterans.

Listen
Listening...
/
Libby Denkmann reports on a new play that tells the stories of Mexican-Americans in Vietnam.

It's hard to quantify how many Latinos served in the military during the Vietnam War, because the Pentagon didn't officially keep count. Latino members of the U.S. military were lumped together with white troops in official documents.

Despite the lack of government data, there is one estimate that Mexican-Americans made up an outsized number of casualties in Vietnam - close to double their share of the American population.

Still, they're often overlooked in academia and pop culture, according to Professor Tomás Summers Sandoval, who teaches History and Chicanx-Latinx Studies at Pomona College.

"In a demographic way it's sort of a hidden history," he said.

Now, more than 40 years since the capture of Saigon by North Vietnamese forces, a play by Sandoval is shining a spotlight on Chicano veterans.

"Ring Of Red: A Barrio Story" is part of a years-long effor.

With help from his students, he recorded more than 50 oral histories from Chicano Vietnam War veterans and their families, mostly from Southern California. 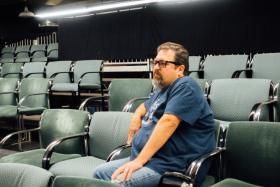 Actors are translating those personal histories into a "testimonial style" play that tackles themes of social and economic justice, violence, and the mental effects of war.

The title, "Ring of Red" refers to the clay ring that lingered in the bathtub of one Chicano soldier after he returned from Vietnam - a residue from the war he couldn't wash off.

"Anytime that I can take people's stories and put them in front of folks without this voice of a professor telling them what it all means, that's a good thing," Sandoval said.

Veterans not only inspired the play, they're are also part of the cast.

Diana Shield, who served in the Marines for four years, said the play's depiction of returning from war resonates with her.

"Adapting to the civilian part of life after four years? I was shocked," she said. "Hearing the men in the story talk about their PTSD - even though they didn't know it was PTSD - that's how it was for me."

Shield's mom is from Guatemala and her dad is from Mexico. She said it's vital for Chicano voices to be reviving their own Vietnam experiences - especially now.

"I think we need to be telling our stories, because we're patriotic too," she said. "That's why my mom and my dad came here. They wanted a better future for their children. That's what I want for my children."

As the war split Americans down ideological lines, the emerging Chicano movement in L.A. linked Vietnam to the struggle for civil rights - activism that's addressed in the play. 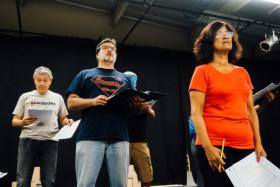 One character muses about life in L.A. in the 1960s, "I started to notice the stuff where I live...How come all the Mexicans lived in the same place? And how come the cops still hassled us and called us greasers?"

Many of the characters in Sandoval's play are conflicted about the war. They end up enlisting out of patriotism or a lack of economic opportunity, or they're drafted.

"I was a combat infantryman. So I was fighting the enemy, so to speak," the elder Sandoval said.

After basic training, Sandoval deployed to Vietnam and got assigned "KP" duty on his first night in the country. "KP," short for "Kitchen Police," involved Sandoval washing pots and pans.

Soon, he was introduced to the mess sergeant, whose name was Chavez.

"First thing he asked me was, 'Where you from, Sandoval?'" I said Los Angeles. And he goes, 'Oh! Do you know Snappy Martinez?'" Sandoval remembered.

"There's got to be 3-4 million people in Los Angeles. But I knew him."

After 30 years working in telecommunications, the elder Sandoval has found a second career acting in local theater, commercials, and working as an extra. He's the only veteran who both contributed an oral history to the project and joined the cast.

Professor Sandoval has been working on his oral history project for seven years, but he says today's political context makes the work more relevant.

"You don't have to look very hard to see the way that Latinos in general are vilified inside of a lot of our popular discourse, a lot of our political discourse," he said. "And these kinds of stories are great reminders of how integrated we've been in this country's history. Really how American generations of us have been and become."

An agency pilot program aims to bypass regulations that can make it hard for veterans to get cutting-edge medical treatment.

As he transitions out of the military this fall, Justin Duhe is going into business for himself. The 28-year-old Army linguist and cyber specialist bought a five acre coconut grove in Homestead, Fla. last year - sight unseen. He knew nothing about coconuts at the time.

The VA Has Expanded Its Crisis Line, Helping It Better Respond To Veterans In Need

The VA has opened more call centers and hired hundreds of additional responders after complaints that some callers experienced long hold times or were sent to voicemail.