It's August. And as we approach the most intense period of the hurricane season, a lot of us are thinking: How warm are the waters in the Atlantic and the Caribbean? How much fuel is out there for hurricanes to feed on?

What most of us don’t know is that the ocean waters here have an unusual feature that can actually help fuel hurricanes. We’re learning more about that now thanks to researchers like Johna Rudzin at the University of Miami.

Rudzin is a postdoctoral associate at UM’s Rosenstiel School of Marine and Atmospheric Science, and she spoke with WLRN’s Tim Padgett from the station’s studios in Key West.

Excerpts of their conversation:

WLRN: Your dissertation is called An Assessment of the Caribbean Sea’s Upper-Ocean Influence on Air-Sea Interaction During Tropical Cyclones. But that title doesn’t mention the work’s key term – something called the Amazon-Orinoco Plume. Tell us what that is – and what it does to the waters of the Caribbean.

Rudzin: This plume is a fresh-water discharge coming off of the Amazon and Orinoco Rivers in the northeastern part of South America. It travels up into the Caribbean at the maximum part of the Atlantic hurricane season. There are some studies about this plume, but none of them really went into that air-sea interface and looked at how this feature would affect hurricanes and the transfer of heat into hurricanes.

READ MORE: How We Left Hurricanes in Our Dust This Year - Literally

And as you explain it, that unusual injection of fresh water into the Caribbean does allow hurricanes to soak up more heat.

This plume creates a sort of freshwater lens on top of the ocean. The lens creates this separation or barrier between the sea surface, which is very warm at this time of year, and the cooler waters below the sea surface. And so, like if you were trying to mix oil and vinegar, it reduces the efficiency for mixing that cooler water up into the sea surface when a hurricane or a strong wind event were to come over.

And this is important because everybody hears about how sea-surface temperature is directly correlated to hurricane intensity.

Your research benefited from some very cool new sensor technology, right? As well as a trip on one of the federal government’s hurricane hunter planes?

Yes, I’m very fortunate. We deploy these special instruments that measure temperature and salinity and current velocities. And you drop them out of the hurricane hunter planes around 8,000 feet. The instrument descends into the ocean, and the data is transmitted through radio frequency to the aircraft. It really gave me a close look at this plume and what the barrier layer looks like.

You’re a conch – a native of Key West. Did your upbringing down there motivate you to go into this work in the first place?

Yes. I was born in Key West. I was raised in Marathon and then in Layton. And my dad was a charter boat captain, and I was always out on the ocean. And then being hit with several hurricanes. I mean, Hurricane Georges in 1998: we had to move houses. I was 8 years old; all my stuff was sogging wet, everything was outside, the roof was partially open, just…when you come back and you’re like, ugh, it is not what you wanted to see.

But instead of instilling fear, I was just very intrigued (laughs) and wanting to understand why things are the way that they are in the ocean. And then I was able to go up into my first hurricane – Hurricane Edouard in 2014 – which was something I’d always wanted to do when I was a little kid. 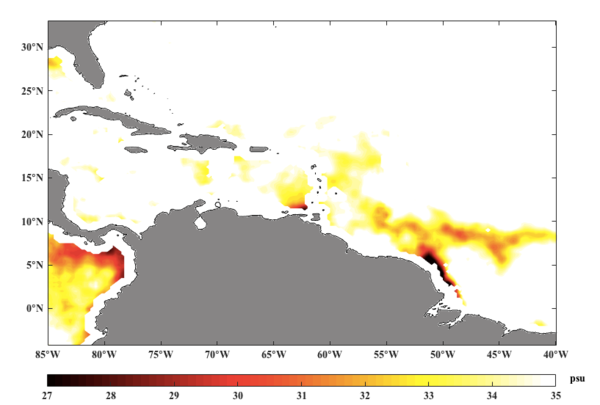 Your research on the Amazon-Orinoco Plume and how it helps strengthen Caribbean hurricanes just won the Barrett Prize from the University of Miami’s Institute for Advanced Study of the Americas. Do you feel your work will benefit the hemisphere?

It’s another, I guess, bad-news scenario. But it’s a start to try to understand another complexity of what affects hurricane intensity that hasn’t been looked at before – and of course impacts the very poverty-stricken countries of the region and also the United States.

Right. There is another feature out there called the Caribbean Low-Level Jet, which creates vertical wind shear this time of year. That's thought to be the biggest factor in essentially tearing apart a hurricane. There's also a phenomenon known as subsidence – the sinking of dry air into the storm that reduces its energy. Those can balance things out.

As sea levels continue to rise in Florida, repeated flooding and storm surge are major concerns for Tampa Bay.

David Hastings, a climate scientist at Eckerd College, said the region could experience some of the most severe effects of climate change. He told the civic group Cafe Con Tampa on Friday that in the next 30 years, sixty-five thousand homes in Florida will flood twice a month affecting 100,000 Florida residents.

None of the more than 1,000 nursing homes and assisted living facilities in South Florida are on Florida Power & Light’s highest priority list for power restoration.

FPL rejected Broward and Miami-Dade counties’ lists, which included these facilities, according to the Sun Sentinel.