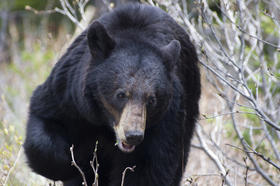 The Florida Fish and Wildlife Commission has completed a years-long count of the state’s black bear population. Director of Habitat and Species Conservation, Thomas Eason says the population has grown by about 60-percent state-wide since the agency’s last estimates.

“The take home message is bears are abundant in Florida and they’re one of our greatest success stories from a conservation perspective here in Florida,” Eason says.

In the East Panhandle, which Eason defines as the area surrounding the Apalachicola National Forest, the bear population has grown by 89 percent since the state’s 2002 estimates to total 1,080 adult bears.

Eason says the population in the West Panhandle has grown by 75 percent, for a total of 140 bears in that area.

Eason says those numbers come from what he calls “cutting edge, scientific estimates.” He says to get that, scientists install barbed wire corrals in forests where bears live. They put bait in those corrals and as bears come in and out, some of their hair gets stuck on that barbed wire.

“We then collect those hair samples from the barbed wire over the summer, and then send them to a genetics lab. And similar to what you see on TV with CSI and other kinds of newfangled genetic approaches, that lab can tell us the sex as well as the individual identity of those bears,” Eason says.

Eason says the numbers stem from samples scientists collected before a controversial bear hunt last year. About 300 bears were culled in the hunt. Officials say the it was part of a plan to maintain the bear population. Eason says his team has not yet made a recommendation on whether a hunt should be held again this year.

Conservation groups want a judge to shoot down the return of bear hunting in Florida and to halt the pending sale of bear-hunting permits.

With permits for this fall's hunt going on sale Monday, the Seminole County-based group Speak Up Wekiva filed a lawsuit in Leon County circuit court Friday challenging the constitutionality of the Florida Fish and Wildlife Conservation Commission-approved bear hunt.

"There is no evidence to support the supposition that hunting bears in remote wildlife management areas will reduce conflicts in suburbia," the lawsuit contends.

Florida's top environmental official was directed Wednesday to rethink a proposal to make state parks more financially self-sustaining, as he and the state's top law-enforcement officer received Cabinet approval for the second time this year.

An annual report by an government watchdog group said the state’s environmental regulatory agency is doing very little when it comes to regulating.

The group said there’s a dramatic shift in how the Florida Department of Environmental Protection operates under Gov. Rick Scott.