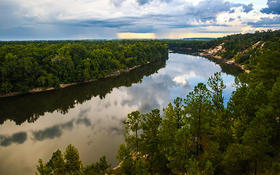 “It came as a result of a massive sinkhole that opened up under a gypsum stack at a Mosaic phosphate fertilizer plant,” she says.

Glickman says 215 million gallons of contaminated water spilled into Florida’s aquifer, and the public did not know about it for weeks.  She also says pollution has devastating effects to Florida’s economy and public health.

“Let’s get the information out in the open and get at the root causes of these problems. This has an impact on our public health. It also hurts our biggest industry in the state, which is tourism, when people who come here to use our natural environments. They’re not going to come to Florida when they hear about pollution,” she says.

Glickman says this law will not solve all the problems caused by pollution, but will help keep industries accountable and better protect the public.

“I think it was executed in a fair manner that met the balance of private business-type needs and getting the public informed in the best way possible,” he says.

Mica says most business are aware of the need for transparency, and this law will extend public notification.

St. Pete Upgrades Should Keep Sewage Out Of Tampa Bay

On a typical spring day, when it hasn't rained in a while, about 7 million gallons of raw sewage flows into St. Petersburg's southwest water treatment plant.

A federal investigation into St. Petersburg’s sewage releases has been closed.

St. Petersburg officials are repairing about 2,000 manholes to make sure the city's sewage system is not overwhelmed during heavy rainfall.

Gov. Rick Scott will sign a bill to step up public notification of pollution incidents, after the measure was unanimously approved Wednesday in the House.

The Florida Senate has passed a bill that would require the state Department of Environmental Protection to promptly notify the public after a pollution spill occurs.