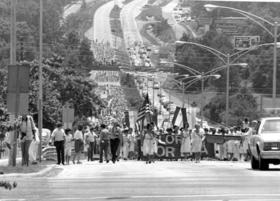 This week Nevada's legislature ratified the Equal Rights Amendment.  It's been 40 years since the last state approved the provision and the move raises questions about Congress' 1982 deadline.

Listen
Listening...
/
Listen to an updated version of our story from 2015 with two new interviews.

Congress sent the equal rights amendment to the states in 1972.  It’s a very simple change.  Aside from enforcement and effective date clauses, the entire amendment is one sentence.

"Equality of rights under the law shall not be denied or abridged by the United States or by any state on account of sex."

Over five years, 35 states ratified the amendment, but it needs 38 to take effect.  Last Wednesday, Nevada became the 36th to approve the measure, and Nick Evans spoke with KNPR reporter Carrie Kaufman in Las Vegas.

NE: So Carrie, tell me what happened this week.

CK: Well this week Nevada became the 36th state to pass the Equal Rights Amendment, it came out of the Assembly and then was concurred in the Senate, and now there are only two states left.

NE: It’s pretty amazing right?  I believe the last state to ratify was in the late seventies, based on your reporting, and so how did the ball get rolling again in Nevada?

It passed largely along party lines.  There was one Republican in the Assembly who voted for it.

NE: Am I right in assuming that perhaps the average person would be surprised this might have happened in Nevada?  Is it really that the election in 2016 is the thing that made this happen?

CK: It was brought up in the last two sessions.  It did not pass.  The last session in 2015 was Republican-led, and it didn’t even get out of committee.  So yes, the election—the fact that there are Democrats there made a huge difference.

But I think it’s interesting your question about will people be surprised that this happened in Nevada—I don’t think Nevadans are surprised.  I think that the rest of the country has kind of looked to Nevada a little differently than we see ourselves.

NE: OK, great, I assume that there have been not just local folks interested in moving this forward, but you’re probably having people parachuting in from all over the country to get involved with pushing this through—

CK:  Honestly I don’t think they are—I think that this, that people on a national level were really kind of surprised by this.  This is something that Pat Spearman really did just kind of push through, and now that it’s being done, now people on a national level are saying, ‘oh, well there’s only two more states left—who could possibly now ratify the ERA and how can we get this through?’

But it was dormant until Pat Spearman came up with this.

NE: Are you hearing anything from folks out there about potential next steps for this?

CK: Well all of the states that have not passed the ERA yet, the only blue state is Illinois.  The only one that is likely, that has a Democratic Legislature is Illinois.  Virginia has not passed it. As you have said, Florida has not passed it.  All the rest of the states are deeply red Southern and Midwestern states.  So I’ve heard some talk about targeting Illinois and targeting Virginia.  I don’t know about the rest.

NE: I guess if there are any final things you’d like to add about just, sort of, getting to witness history—

People gave very moving speeches, and Jill specifically talked about, yeah, this may be symbolism, but her wedding ring is symbolic, we stand under Nevada’s seal every time we go into legislative session, the US flag also flies.  All of these are symbols that have an impact on people. And the argument for voting for this is that these symbols will make women feel like they are equal even if it’s not passed.

Despite Languishing In The Statehouse, ERA Supporters Still Pushing For Passage

Some bills die near the finish line, but some never quite make it out of the gate. A bill to ratify the Equal Rights Amendment died without a hearing yet again. Disparities between men and women have been an ongoing feature in national politics, with a new story roiling to the surface seemingly every few weeks.

“Well first of all I am very grateful to Representative Berman for entrusting me with this responsibility because I do see it as a big humongous responsibility to keep the flame of the equal rights amendment alive and well.”

Baez is happy to see another state ratifying the amendment, but she has now illusions about the road ahead.

“Well, I think with every state that passes this we inch closer to where we need to be.  I don’t anticipate that we are going to have three states pass it this year, therefore making it into the constitution,” Baez says.  “But if we have to just fight for two more states next year that is a victory in my opinion.”

But even if lawmakers can gain passage in two more states, questions remain.  Congress imposed a 1979 deadline before extending it to 1982.  But the deadline was confined to the statute sending the amendment to the states—not the amendment itself, and some ERA supporters cling to this detail to suggest Congress could again choose to revise the deadline.

To make matters even more complicated, three states rescinded their approval after first supporting the provision.  Here the amendment’s supporters point out the constitution is silent on the idea of a state overturning its vote after the fact.

When Women Pay More Is It Discrimination?

Women have gained more financial power in recent years. But they’re still paid less than men and as technology makes it easier to comparison shop, women in Florida and across the country are realizing they’re paying more at the checkout counter. It’s known as the “pink tax.”

Waving signs reading “Nasty Women Unite,” and “Choose Love,” thousands of marchers poured into downtown St. Petersburg Saturday to support women’s issues and civil rights. It was one of hundreds of “sister marches” happening the day after President Donald Trump’s inauguration, as a protest to his agenda.