'The Most Upsetting Thing Anyone Can Imagine:' Kids Sue Florida Over Climate Change

They say it's not just inaction. The lawsuit states Florida officials have pursued policies that worsen the threat from greenhouse gas emissions, and violate Floridians' constitutional rights to health, prosperity and happiness.

The plaintiffs, who range in age from 10 to 20 years old and come from throughout Florida, made their case at a press conference in Miami on Tuesday.

Listen
Listening...
/
Hear from some of the plaintiffs suing the state of Florida over climate change.

"We love Florida so much," said 15-year-old Valholly Frank, who grew up on the Seminole reservation in Big Cypress preserve and now splits time between there and Weston. "To see the oceans rise... is the most upsetting thing that anyone can imagine."

Working with attorneys from the non-profit Our Children's Trust, the kids filed suit against Scott; gubernatorial candidate and current state Agriculture Secretary Adam Putnam; Environmental Protection Secretary Noah Valenstein and others on Monday. They're not seeking damages, but want state officials to come up with a "climate recovery plan" that would get Florida off of fossil fuels by 2050.

"We worked with energy experts that have opined it's feasible," said Andrea Rodgers, a senior attorney with Our Children's Trust. "Greenhouse gas reductions are "do-or-die, essentially. We have a very short window of time to reduce greenhouse gas emissions before it's too late and the climate system [changes] become unstoppable."

“It’s gotten to the point where we are the powerful ones,” says plaintiff Valholly Frank, a 15-year-old in the kids #climatechange lawsuit.

During the press conference, several of the plaintiffs said they'd like state leaders to promote solar energy as part of the solution to climate change, global warming and sea-level rise.

"There are solutions, and the sooner we begin widely implementing them, the better chance we have to save Florida and the less costly it will be," said 18-year-old Delaney Reynolds, a Miami activist who's written books and delivered TED Talks on sea-level rise, and appeared in a video about rising seas with actor Jack Black.

Reynolds pointed many of her comments at Gov. Scott directly. 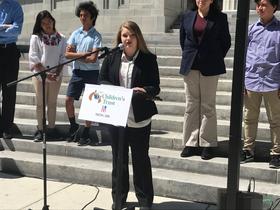 "In 2017 during our region's Hurricane Irma recovery, he was asked about climate change and never answered the question," she said. "Instead, not so ironically, he talked about getting the power companies back up and running and supplying gasoline for cars."

After the kids filed suit on Monday, a spokesman for Scott responded by highlighting the governor's record on environmental issues.

"The governor signed one of the largest environmental protection budgets in Florida’s history last month – investing $4 billion into Florida’s environment," spokesman McKinley Lewis said in a statement, according to the Miami Herald. "The governor is focused on real solutions to protect our environment – not political theater or a lawsuit orchestrated by a group based in Eugene, Oregon."

At Tuesday's press conference in front of the Miami-Dade County Courthouse in downtown Miami, Reynolds described Scott's well-documented reluctance to take action on climate change as a form of political theater, and said his environmental protection budget "is for items decades in the making, such as Everglades restoration, sewers in Monroe County and Lake Okeechobee’s dike."

"Ask him to show you where he’s budgeted money to reduce carbon in Florida," she said.

Lawyers for the plaintiffs said they're now waiting for the state's response to the suit. The case is one of nine in which kids backed by Our Children's Trust have sued their state governments over climate change. There's also a federal case, which is set to be heard in Oregon district court on Oct. 29.

"I’m sure all the plaintiffs in this lawsuit and in my federal lawsuit would like to be able to go outside and not be stepping right into the ocean," said Levi Draheim, 10.

This story has been corrected to clarify the nature of the lawsuit. The plaintiffs are suing Florida officials not for inaction, but because they allege state energy policies have actually worsened the climate change threat.

A scientific paper published in February may pave the way for a new conversation about rising sea levels using data instead of projections.

Environmental advocates from around the country will be gathering at the University of South Florida for the Climate Action 2018 conference.

The goal of the event is to inform both lawmakers and the general public about the consequences that climate change has on the nation and how people may be able to stop it.

If You Live In Florida, Your Mortgage Might Be At Risk Due To Climate Change. Symposium Explains

If you own a house in South Florida, you might want to start thinking hard about sea level rise.

The ocean here could rise a foot or more in the next 30 years -- the amount of time in a mortgage cycle -- according to University of Miami professor Harold Wanless and other researchers.  That means if you buy a house today, and rising seas put your house at risk for flooding, your property value might decrease... but your mortgage payments won’t.