Some of Florida’s military supporters are lining up behind the state’s land acquisition program. Unlikely allies are joining forces to defend Florida Forever. 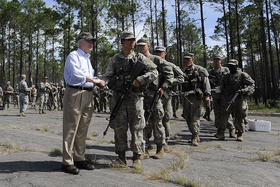 The Florida Defense Alliance says state lawmakers are putting military bases at risk, by not buying up conservation lands. The group sees Florida Forever as a way to stem development around the installations. The program is also a top priority for environmentalists. Both hope to restrict development around sensitive areas.

But the legislature has zeroed out its funding for three years running. Now Representative Holly Raschein of Key Largo says her district’s bases are feeling the pressure of development.

“I commit to you, and I think I can bring Representatives Trumball and Ingram on with me, that we are going to take this up. And we’re going to have to rewrite the budget after this storm season. But land acquisition and those things are very, very important,” Raschein said.

This year she says she’ll be pushing the national security argument for Florida Forever.

Lawmakers routinely funded Florida Forever at $300 million a year before the Great Recession. But in recent years the program hasn’t survived budget talks.

Former U.S. Sen. and Florida Gov. Bob Graham says the Legislature’s decision not to fund Florida Forever is a blatant violation of Amendment 1, the 2014 conservation amendment.