For Military Spouses With Professional Licenses, Each Move Can Mean A Bureaucratic Fight

When military families move, the careers of service members' spouses may grind to a halt because they lack a professional license in their new state.

Listen
Listening...
/
Sarah Harris reports that military spouses with professional licenses often have trouble transferring them to other states.

Aleta Nims and her family moved to upstate New York from Tacoma, Wash. a year ago for her husband's military job. He's the Air Force detachment commander at Clarkson University, where he teaches ROTC students.

Nims was in the Air Force too. But she went back to school to become a mental health counselor and spent years building up a private practice.

"I had probably between 25 to 30 clients that I was working with," she said.

But moving to New York meant leaving her practice behind, and resuming her career in New York comes with a substantial bureaucratic challenge.

There are two professional exams you can take to become a mental health counselor. Washington accepts one, New York accepts the other. If Nims wants to keep working in her field, she'll have to get re-licensed.

"We pulled into town on July 30; on August 1 we started house hunting," Nims recounted. "On August 2, I started freaking out that I was losing my career."

"I was like, 'What am I doing, this is insane, I worked so hard to get my license in Washington, I can't not be licensed," she said.

So she started the licensing process all over again. 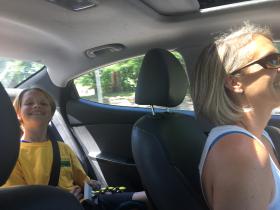 "Of course, it's all online," she said. "You're not talking to anybody, so you're trying to read the instructions, and I had to fumble through some of that and understand the paperwork that I needed."

Nims had to dig up tons of documents, which took months. She had to get approved by the state of New York to take the exam, wait a month for a testing date, and pay a bunch of fees, although New York will refund some of her money because she's a military spouse.

She said she understands why the regulations are in place to prevent bad actors from getting licenses.

"But for the rest of us, who are just honest people trying to do good things in the world, it can become a very, very frustrating and complicated process to try and work through," Nims said.

There's no guarantee of a job for Aleta Nims at the end of this. Her husband's assignment in New York is only three years long. Like a lot of military spouses, she found herself asking whether pursuing a license was actually worth it, because the next time they move, she could be in the same situation.

"If it takes you two years to get through the system, it isn't a very effective system," said Lynne Borden of the University of Minnesota Department of Family Social Science. Bordon and her colleagues worked with the Department of Defense to study state licensing accommodations for military spouses.

They found 48 states have tried to make the process easier by lowering fees for military spouses or fast-tracking their applications. But because states maintain their own licensing requirements, the process can still be baffling and discourage spouses from getting their licenses.

"It has a ripple effect on their family's financial health and their satisfaction and ultimately can impact how long the service member chooses to stay in the service," said University of Minnesota research scientist Adeya Richmond.

Richmond said state occupational boards can make the process easier by posting clear guidelines on their websites and making sure spouses can get in touch with government officials to ask questions.

Lacking a New York counseling license, Aleta Nims and her family get by on her husband's salary and with some extra money she makes selling skincare products.

Nims said the bright side is she gets to spend more time with her kids.

"For me to have that kind of extra time and mental bandwidth to devote to parenting, I think has been a huge blessing," she said.

And Nims may end up working in her field after all. She just took the licensing exam to become a mental health counselor in New York - and she passed. Now she's waiting to finally get her license from the state so she can find a job.

But the former Pentagon official is now running the VA said he's promised to protect the VA from politics and total privatization.

They Were Recruited Into the Military, But Non-Citizen Troops Now Face An Uncertain Future

From 2009 to 2016, the Defense Department recruited more than 10,000 non-citizens into the armed forces. Now some say they're being discharged without explanation.