Medical marijuana supporters gathered at the Capitol Tuesday in a show of support for legalization. They’re championing a bill by Rep. Sen. Jeff Brandes (R-St. Petersburg) that he says would allow doctors to be the decision makers on who qualifies for medical marijuana and who doesn’t. 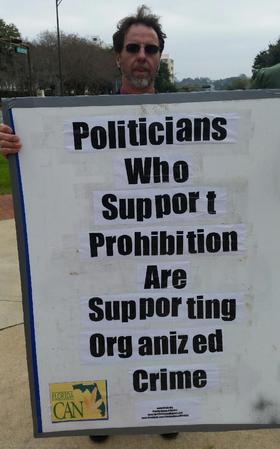 The Florida Sheriffs Association opposes the initiative, but Executive Director of Law Enforcement Against Prohibition, Neil Franklin says the time for change is now. “You know it’s time for law enforcement to get out of this business of trying to tell people what’s best for them and let the doctors and let the patients decide what’s best for them, and that’s what’s happening here today at the state Capitol,” said Franklin.

The rally featured politicians and citizens like ALS patient Cathy Jordan. Jordan became a poster child for medical cannabis after her husband, Robert Jordan was arrested on cultivation charges in 2013. He was able to avoid jail time after a Florida prosecutor dropped charges, but he says the threat of legal action still lingers. “They gave us medical necessity. So it’s just strange, we’re in a grey area here... we’re semi-legal. They know we grow cannabis, they know she uses it and they’re not arresting us. But what we need this legislation for is to stop the threat of arrest, they can arrest us anytime.”

The latest push to legalize medical marijuana in Florida is getting support from law enforcement.

One supporter of this legislative approach is Pinellas County Sheriff Bob Gualtieri, who tells WUSF News that  while he opposed Amendment 2,  there's more to like in SB 528.

There's a new push to legalize medical marijuana in Florida, and a Republican lawmaker is leading the charge.

Five nurseries will be part of a 12-member panel announced Friday to hammer out rules on who can grow medical marijuana and how it will be distributed to patients.

The rule makers selected by the state Office of Compassionate Use will meet the first week of February in Tallahassee to set up the regulatory structure for the five nurseries eventually selected to grow, process and dispense medical marijuana in Florida.

A panel comprised of the director of the state Office of Compassionate Use, an accountant and a member of the Drug Policy Advisory Council would pick five nurseries to grow, process and dispense medical marijuana under a revamped rule released Thursday by the Florida Department of Health.

The selection committee would take the place of a lottery system initially proposed by the agency but nixed by an administrative law judge last year and is one of a number of changes included in the 10-page draft rule.