Saturday is "Lionfish Awareness and Removal Day" in Florida. Lionfish are an invasive species off Florida's coasts. People in southwest Florida are studying the fish's impact and others are helping to keep the invasive species' population under control.

Sometime in the 1980s, a boat coming somewhere from the Indo-Pacific had lionfish onboard.  That's how they ended up in the waters off Florida where they don't belong. They’re white with red stripes, and have eighteen hypodermic-like needle-sharp venomous spines on their fins. They're the kind of fish you see in aquariums.

They’re pretty fish. But, as Florida Gulf Coast University marine biologist Mike Parsons said, their impact on the waters off  Florida’s coasts, where they’re not supposed to be, has been anything but pretty.

“In terms of marine invasive species, this is probably one of the major ones that have had an impact on the Caribbean and the Gulf of Mexico," said Parsons. "This is probably the biggest impact we’ve seen locally.”

“A female can basically spawn 20,000 eggs every two or three days. And so a single female can spawn 2 million eggs a year," he said.

Parsons also said lionfish are more productive when it’s warmer. And in recent years those high levels of production remain constant year round.

Underwater videographer Kevin Lollar usually records himself spearing the fish. It’s one of the only ways to catch them. You cannot hook-line-sinker them or drift net them.

He catches lionfish so Emma DeRoy, a marine invasion biologist from Canada, can study them at FGCU’s marine lab, Vester Field Station, near Bonita Beach.

She got a few from the refrigerator and talked about her research.

“These guys, I’ve just been dissecting to take a look at their internal anatomy," DeRoy said. "It’s really astounding to know how voracious the appetites of lionfish are.” 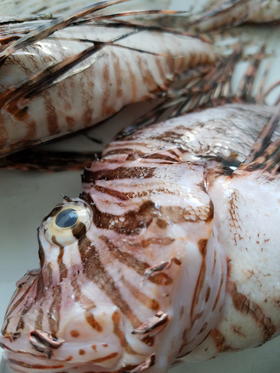 In addition to their high production rates, lionfish are near the top of the marine food chain. They eat anything and everything.

“Lionfish are notorious overeaters," DeRoy said. "So they’re kinda gorging themselves on prey.”

They eat a lot of things humans like to eat; shrimp, crab, grouper, snapper. And that’s not good, because there are less of those critters for us to eat and most importantly lionfish offset the marine ecosystem. They can create somewhat of an ecological desert wherever they go.

Chef Laura Owens, who heads the kitchen at Cj’s By the Bay on Marco Island, said the best way—the most delicious way—to keep the lionfish population down is to eat them.

She’s even contributed to a cookbook dedicated to lionfish.

“Lionfish have an amazingly delicious diet. They eat all the things we like to eat," Owens said. "Because they have that diet, in turn, the lionfish are very very tasty. The flesh is almost sweet in flavor.”

And she said there’s no shortage of ways to cook lionfish. It’s just a matter of taste.

“It can be sautéed. It can be fried. Grilling can be a little challenging because of the thinness of the fillet. But it can take multiple cooking techniques,” Owens said.

Today, lionfish is on the menu at Shangri-La’s restaurant in Bonita Springs. Chef Pyro Rodriguez is preparing it  a few different ways.

And not to worry. Chefs take off the sharp venomous spines before the fish gets to your table. 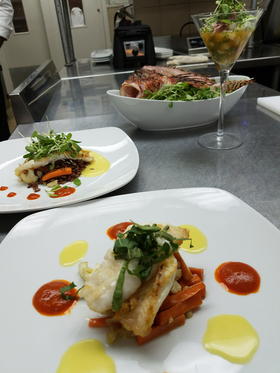 “I created a bundle on the plate of carrots and cauliflower," Rodriguez said, pointing to his culinary creation. "And the other plate, what I did is was added some nice wild organic rice. Mix it in with parsley, shallots."

There’s lionfish ceviche in a martini glass. There’s a whole baked lionfish on a bed of greens.

“I’m kind of a purist. I like to just salt and pepper it and sear it," said Rodriguez. "My second favorite is the ceviche. That just takes me home. The Dominican Republic is where my family grew up.”

When it’s done. I give it a try. Here’s my layman’s assessment: really good. It tastes, I guess, a little more flavorful than mahi. I guess more exciting. But that could be more psychological because it’s a lionfish.

But at $12 a pound, lionfish isn't something most people can eat on a day-to-day basis.

Parsons  said there’s no shortage of things to study about them.

“One great study would be if you constantly remove lionfish from some artificial reefs and leave them in other artificial reefs. Can you compare the environments with or without lionfish?," he said. "And what kind of a sense on how fish numbers change, how diversity changes.”

Parsons said it’s impossible to eradicate the invasive species, but marine biologists can study their behaviors to potentially learn to mitigate the damage they cause.

Kevin Lollar, Emma DeRoy and crew from the Vester Field Station head to the Florida Keys next week to catch more lionfish.

Recreational and commercial fishermen can help get rid of the nuisance and be rewarded for hunting lionfish by participating in the state's Lionfish Challenge. It lasts from Saturday until Labor Day.

This Saturday is not only Lionfish Removal and Awareness Day, it’s also the kick off for Florida’s Lionfish Challenge—an incentive program to encourage people to remove the nonnative species. State wildlife officials are doing a bit of a revamp this year.

Florida’s fishing industry has dealt with its fair share of problems, with oil spills and grouper shortages. But as Matthew Seeger reports, an article from Florida Taxwatch exposes another problem- ecological damage caused by a hungry little troublemaker known as the lionfish.

FWC On Lionfish Control Efforts: App Gets Needed Upgrade, 'Adopt A Reef' On The Way

An app unveiled by Florida Wildlife officials months ago to combat invasive lionfish has received some upgrades.

Florida Fish and Wildlife Conservation Commission spokeswoman Amanda Nalley says the “Report Florida Lionfish” app has been doing pretty well with thousands of downloads since its May launch. And, she says the users’ experience has now improved.

Desperate times call for desperate measures. And, by most counts, the lionfish situation in the Caribbean, Atlantic and Gulf qualifies for desperation. Genetic evidence suggests that three to eight of the fish released from captivity about 30 years ago have reproduced in such magnitude that they now threaten native marine life such as grouper, snapper and lobster.

The Florida House okayed a bill to limit the sales of nonnative animals by pet dealers. The Bill hopes to discourage nonnative sales altogether.

Florida is a prime breeding ground for invasive species that can threaten the state’s ecology and economy. For every lionfish or Burmese python that’s captured, thousands remain. And the sheer scope of the problem is pushing some lawmakers to ask how much of a difference state funding actually makes.