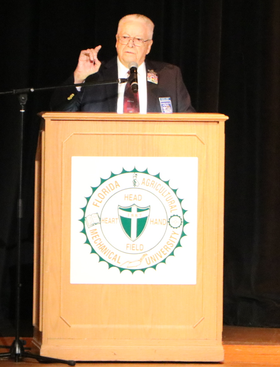 Lieutenant Colonel George Hardy, is the youngest member of the Tuskegee Airmen. Thursday, he spoke at Florida A&M University. The discussion focused on racial segregation and what took place shortly after it was outlawed.

Lieutenant Colonel Hardy said he wanted to join the Navy because his older brother enlisted. His dad wouldn’t allow it because of how the Navy treated people of color.

Hardy said, "the whole country was segregated, but the army and navy were really segregated the army had ninth and tenth cavalry and infantry unit and blacks in the service. But the navy had no officers and the only way you could enlist in the navy was being a mess attendant, dealing with preparation and serving of food, that’s how rigid segregation was."

Eventually like his older brother, Hardy signed up to join the navy. Luckily, they needed pilots and that’s all Hardy wanted to be, but after studying and passing the necessary test he failed the physical because of his teeth.

The lieutenant colonel said, “I went to the dentist and he said nothing’s wrong with your teeth the navy won’t take you. So then I realized that race is a real problem, I wanted to fly so then I went to the army.”

Once in he said he faced more segregation. The Lieutenant Colonel is from Philadelphia. And when he was stationed in Mississippi he says he was a surprised with how firm segregation was in the South. Especially when trying to eat on a train.

“Now it was a shock for us going into segregation like that but they did give us Pullman tickets. So when Pullman tickets bring their dining car for us 18 year olds. We changed in Cincinnati and that’s when it started. We still had Pullman tickets but when we went to the dining car we had to eat behind this curtain." He added, "then we got off at Biloxi, Mississippi because Keesler Field was rigidly segregated, Afro-Americans had their own section there. Enlisted people and they were segregated on base but there was no colored officers there. So when we went out to the firing range we were there by ourselves. And then when we left whites would go, th at’s how rigid it was in those days but we made it through. “

But he said that all changed when the United States Air force announced they would no longer segregate.

Hardy said, "When I heard that, I was upset. For some reason I was going to go to Lockbourne I was a pilot that’s all I was but I knew so many people there. I had the vision that I would go to a base that’s all white and I didn’t know anyone, and I wasn’t sure I wanted to face that right away.”

He was shipped off to Guam weeks after the integration announcement where he was the only black person on the base.

"Now those of us who went into part of integration faced problems like this. In May of 1950 I got a new squadron commander. Leiutenant Colonel Fred W. Miller, I will never forget that name." He said, "I soon found he wouldn’t talk to me, except in the line of duty. If it was a question about maintenance he’d talk to me but other than that I didn’t exist in his mind."

His squadron commander wouldn’t allow him to fly because he was black, but he did get the chance under a new commander. Throughout the military he faced more discrimination when trying to stay in base housing with his wife and kids. Certain communities wouldn’t allow colored and white families to live in the same area. But ultimately he says he wouldn’t change a thing.

“When I look back on my career and whatnot I just feel very fortunate and I’m just so proud of the air force and the support that they gave someone like me,” said Hardy.

The Lieutenant Colonel says now when he goes places he sees black admirals in the navy and in other positions that weren’t allowed to be filled by colored people. He says that makes him happy for the younger generation.

He said "If kids grow up and see those pictures of people in these positions then they can aspire to things like that. At least there’s a hope, they say there’s a path to that and they take hope and maybe they will study more and work harder and figure that I can make it too.”

Plant City is best-known for its annual Strawberry Festival, but there is much more to this Hillsborough community.

For example, some may not know the city is also home to the Bing Rooming House, a National Historic Site that was once a hotel for people of color during segregation.