In the workers comp system, employees agree not to sue when they get hurt and their bosses agree to pay medical bills and lost wages. German Chancellor Otto von Bismark thought it would humanize the industrial revolution. 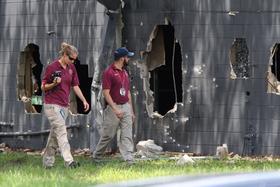 But in the early 2000's, Florida and a handful of other states went on a business friendly cost-cutting binge. Orlando attorney Geoff Bichler says injured workers were left out in the cold.

Bichler represents St. Petersburg firefighter Bradley Westphal, who sued when he lost coverage for his severely injured back after hitting a two-year cap. The Florida Supreme Court struck down the so-called “temporary total disability” portion of the law, but Justice Fred Lewis called the entire system a “charade.”

“Before this, he was always a practical joker. He didn’t take life too seriously. He was the life of the party. In fact, his haz-mat team would say that he was like the little brother that was always poking jokes and things like that.”

A National Public Radio and Pro Publica investigation last year found that the reforms saved employers millions, dropping rates in Florida from $3.42 per every $100 in wages to just $1.85.

But National Federation of Independent Businesses’ Bill Herrle says there’s one overriding reason insurance companies are about to get a 14.5 percent rate hike.

“This is about additional attorney fees in what is supposed to be a self-executing system.”

In April, Florida Justices struck down caps on attorney fees in the workers comp system, even though the system is supposed to discourage lawsuits. Bichler says  lawyers wouldn’t be necessary if insurance companies weren’t so quick to deny claims.

It’s too early to say how lawmakers will respond. Some lawmakers have promised to push for PTSD coverage for first responders. Associated Industries of Florida lobbyist Barney Bishop says insurance companies will probably ask to extend the law’s two-week deadline for deciding on a claim.

Bishop says he also expects a crackdown on prescribing addictive painkillers to injured workers as the state wrestles with an overdose epidemic.

Just when they thought they had dodged a bullet, it looks like Florida businesses will be hit with a major increase in workers compensation rates after all.

State regulators may be close to deciding on a proposed 19.6 percent increase in workers’ compensation insurance rates.

In another sign of a building debate about Florida's workers' compensation insurance system, attorneys for injured workers are blasting a proposed insurance rate hike for employers.

The National Council on Compensation Insurance, which submits rate proposals for Florida's workers' compensation insurance industry, on Thursday filed an amended rate proposal that would boost the average rate by 19.6 percent, up from an increase of more than 17 percent proposed in May.