Back when Laura Rollins first used food stamps for her family—more than two decades ago—she was sometimes embarrassed to use her  stamps at the grocery store.

“When we used to have those books of food stamps that you know that to me was embarrassing because that was telling everybody that was around me and letting them know that, ‘oh, she’s poor,’” Rollins recalls.

Rollins is nearly 64 years old and lives in Fort Lauderdale. Her three boys are grown. She works part time at MacDonald’s and takes care of her great-grandbabies a couple of days a week.

She’s needed on-and-off help buying food over the years.  Right now, she qualifies to get $16 a month from the Supplemental Nutrition Assistance Program, or SNAP. It’s not much, but it helps.

And these days, her benefits automatically get loaded up on a special SNAP credit card—called an EBT card. No book of stamps.

“Right now, I swipe my card like it ain’t nothing because it looks like a really cool credit card,” she says.

THE CARD AND THE BILL

That EBT card, and where Rollins and the other nearly 3.7 million Floridians with SNAP benefits can swipe it, is at the heart of a bill making its way through the legislature.

House Bill 103 and its companion, Senate Bill 284, propose that produce sellers at non-brick-and-mortar locations—like farmers markets and flea markets—could set up EBT systems to accept the SNAP cards. It adds that a vendor could run the card system on behalf of other farm stands at the market.

“Currently only about 21 percent of farmers markets accept EBT benefits,” the House bill’s sponsor, Rep. Reggie Fullwood, D-Jacksonville, told the House Health & Human Services Committee in January. “So we look at this as really a way to encourage folks who receive  assistance from the state and federal government to eat healthier and utilize our farmers markets.”

It passed in the House this year and it’s now making its way through the Senate. This is the third time it’s been proposed and this is the farthest it’s ever gotten.

On a sunny Saturday at the Southwest Community Farmer’s Market in Miami, the Urban Oasis farm stand is loaded  with turnips, cilantro, broccoli and baskets of fresh greens.

People who use SNAP can shop here, but without the EBT system vendor Carl Templer has to go through a lot of steps to get reimbursed:

That’s part of why Urban Oasis has started using the EBT system at some of its other locations.

“It speeds it up,” says Templer. “And also it makes it more comfortable for the customer not to have to say, ‘well, I'm a food stamp customer.’”

It requires a machine to swipe the cards along with reliable Internet access, and the vendors have to apply to be part of the SNAP program—which can be a lot for a small operation.

Still, Urban Oasis and other produce vendors have already started connecting to the EBT system and running SNAP cards on behalf of other farmers at their markets.

Supporters of the bill, like Fullwood, say this is a first step to encourage more markets to use SNAP cards.

“If we can get new farmers markets popping up to meet the demand, that would be awesome,” says Fullwood. “I hope five to 10 years from now we look at a bill like this and say, ‘wow, because of this bill and bills like it, we have a healthier public.’”

RATHER NOT USE SNAP 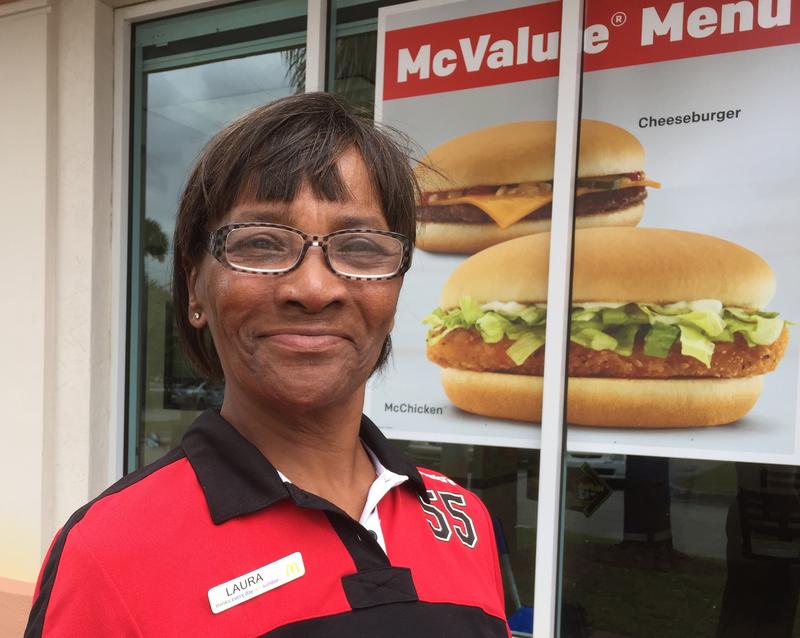 Laura Rollins likes the idea of being able to swipe her SNAP card in more places, like the big flea market not too far from her house.

“It would change a lot of the way I would shop because then I could run to the Swap Shop and I could just pick up everything I need right there from the Swap Shop,” says Rollins.

Still, if it were up to Rollins, she’d rather not need SNAP at all.

“And it’s not only just me; it’s a lot of people that don't want to rely on this stuff. You'd rather be providing for our families on our own. Being responsible,” says Rollins.

She wishes lawmakers would give more consideration to a tougher political fight: raising the minimum wage.

Over 1 Million Face Loss Of Food Aid Over Work Requirements

More than 1 million low-income residents in 21 states could soon lose their government food stamps if they fail to meet work requirements that began kicking in this month.

Food stamp recipients in Florida are buying a lot more from farmers and farmers markets.

The U.S. Department of Agriculture says expanding access to fresh produce for SNAP recipients has been a top priority.

Redemptions under the Supplemental Nutrition Assistance Program, formerly the Food Stamp program, have ballooned since 2008 by more than a thousand percent.

Amy Rupert-Secol is chief vegetable officer at Homegrown, a Central Florida food co-op. She says even more could be done to get low-income families to shop local.