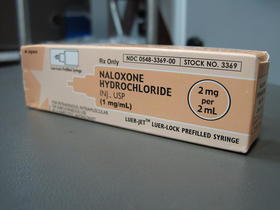 More than 2,000 people in Florida died from an accidental prescription overdose in 2013.  Now a Florida lawmaker has filed a bill to expand access to the drug naloxone which can save the lives of people overdosing on opioids like Oxycontin, Morphine or heroine.

State Sen. Greg Evers, R-Crestview, is sponsoring SB758, known as the “Florida Opioid Overdose Prevention Act.”  The measure would allow doctors to prescribe naloxone, not just to patients at risk of an opiate overdose, but also to a friend or family caregiver.  Naloxone, commonly referred to by its brand name, Narcan, has been in use for more than four decades and has been found to be remarkably effective.  “It’s essentially an opioid itself, but with absolutely no abuse potential whatsoever,” said Lee Memorial Health System Emergency Physician Dr. Aaron Wohl.  “It competitively binds to opioid receptors in our central nervous system and essentially knocks off the opioids’ effects and it happens within 45 seconds to a minute and completely reverses the profound respiratory depression that occurs with opioid overdose.”

It’s available in a variety of forms including an auto injector like an Epipen, which is used for someone suffering from a severe allergic reaction.  Physicians can already prescribe Naloxone to patients at risk, but’s its use outside of a hospital setting is not common practice in Florida.

Kelly Corredor is President of the non-profit Skeeterhawk Experiment, which addresses issues related to prescription drug misuse.  She points to similar initiatives in place in about 25 other states as proof of its effectiveness.  Specifically, she points to a naloxone access program in Massachusetts.

“They concluded that communities with high implementation of overdose education and Naloxone distribution had a nearly 50% lower overdose mortality rate compared to communities that did not implement overdose education and naloxone distribution in that state over the course of a six to eight year time period accounting for community differences,” said Corredor.

“Naloxone has been referred to as garlic to a vampire.  It’s a very horrible feeling when you’re reversed with naloxone if you’re dependent on opioids, said Dr. Wohl.  “And the research that has been present through the last ten years of this practice throughout the country has proven that that’s just simply not true.”

Corredor says another challenge facing her organization, is one of changing public perception about who’s at risk and understanding that not everyone who overdoses on opiates necessarily has a substance abuse disorder.  “If you look at the data nationally at the CDC level,” said Corredor, “They have concluded that some of the highest risk populations at risk for prescription opiate overdose are actually some nine million people reporting long-term medical use of opioids.”

Bill Gettle has been on the brink of death from a heroin overdose more than once.

Three years ago he overdosed and had to be revived with a reversal drug called Narcan.

“I didn’t really care,” Gettle said. “I was using amounts I knew I’d seen other people die from. In my early 20s, I lost more than one friend to overdose.”

In the past decade, fatal painkiller overdoses among women have increased 400 percent, the Tampa Bay Times reports. The CDC says more men still die from overdosing on prescription pain pills, but women are catching up quickly. While Florida doesn’t track the gender of people who die from an overdose, more than 1,500 babies are born addicted to the pain pills each year, according to state data.

For more than 40 years, there’s been a drug that can stop a heroin overdose in its tracks, if someone gives the drug in time.

And it turns out that the same drug works for patients who overdose on prescription painkillers such as morphine or OxyContin --drugs called opiods because they mimic the action of opium.