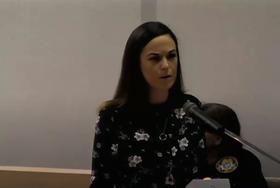 The Florida Department of Corrections is looking into changing the rules for prison visitations. But, prison officials are getting pushback from different families and friends of inmates currently behind bars.

12-year-old Alonia Wilson says keeping the prison visiting schedule the same is very important to her.

“Why would you take away our time to see our mothers, fathers, brothers, and sisters? We should not be punished,” she said, during a public hearing Thursday. “They did a crime, not us. Visitation is something I look forward to every week, and I know every kid like me feels this way. If visitation was gone, it might lead us in the wrong direction. Also, without visitation, it could lead to depression from the lack of seeing our loved ones.”

She says she does not understand why the Florida Department of Corrections has to make any changes, and neither do her fellow classmates.

“I surveyed my sixth grade class, which knows little about this topic, and everyone thought visitation should stay put,” she added. “One of the students in my class said, ‘it’s disappointing to hear. Don’t they understand you didn’t commit a crime?’ My fellow student said that, who is 12-years-old. How do they understand that? Do you want us to suffer? Do you want us to become angry and start protests? Do you want to try something that failed in another state? That could invite chaos.”

Wilson along with many others testified at part 2 of a public hearing to consider making changes to prison visitation rules.

An initial rule change would have limited visitation to correctional facilities to essentially two per month for a minimum of two hours. And, that may have depended on the inmate’s number within the prison system. Today, you can visit every Saturday and Sunday from 9 a.m. to 3 p.m.

But, now, a new proposed rule would break up the visitations into three designations: standard, modified, and emergency.

Standard is what’s currently in place. Modified is based on every other weekend—based on inmate misconduct or contraband brought into the facilities. The last is for emergency situations, like hurricanes.

“Once this rule is implemented, we will designate those facilities that will be on standard visitation or modified visitation,” said Richard Comerford, Assistant Deputy Secretary of Institutions for the Florida Department of Corrections. “When that is done, there will be an advanced notice. There will be a posting on our DC website, as well as our institutional website to designate what these institutional visitation schedules are.”

Nothing is in place yet, since the Department is required to by law to go over the transcript of the public hearing, before implementing the rule.

And, officials will have to comb through hours of testimony at the hearing.

Some opposed to the rule actually traveled hours to get to the hearing, but Doreen Hoban traveled the furthest. She’s from Ireland.

“I have travelled over 4,000 miles from Ireland in order to be able to spend a couple of hours every weekend with my partner,” she said, at the time. “I have left behind my families, my friends, and my whole life or those visits. I drive for hours on the weekends, I stay at the hotels, and I say nothing as week after week, visitation starts late. I gave up everything for those couple of hours. They are my whole week. I would never do anything to jeopardize those visits. Why then are you putting such little importance for something that I gave up so much for?”

Corrections officials have said the rule change is because of an increase in contraband brought in by visitors and staffing shortages.

But, Hoban takes issue with that.

“If there’s such a shortage of staff, then why is there six to seven officers sitting around, chatting during last weekend’s visit? I would also like to know why the focus of fighting contraband has been targeted on visitors,” she added. “Last weekend, I witnessed an correctional officer being escorted out of the prison to be arrested. Actually, because of this, I actually lost visitation time. Your staff, you own staff, are introducing contraband into your own prisons. Now, that is a fundamental issue.”

And, Mallory Naber agrees. She was a correctional officer for seven years serving in several different capacities. She also has a family member in prison.

“I haven’t caught many visitors bringing in contraband,” she stated. “But, I have seen many staff members let go for introduction of contraband. In regards to staffing issues, if prisons weren’t so toxic and stressful to work in, maybe you could keep the ones you have and properly train them to treat inmates like humans vs. cows. And, almost eliminating visitation is not the answer.”

Florida Department of Corrections Secretary Julie Jones has acknowledged that contraband is a problem among the staff—even asking lawmakers during this past legislative session to allow for more x-ray machines to search body cavities for contraband.

“More x-ray machines, and increases our ability to look—not a TSA type machine—but inside body cavities in order to look for contraband that have been placed there, and we’re also increasing searches for our own staff,” said Jones, at the time.

Meanwhile, a lot of people also accused the Florida Department of Corrections of making these changes to open the door to exclusive video visitation, which charges participants money. In the past, the prison agency has maintained it’s just an additional tool to weekend visitation.

Still, while all opposed the visitation rule change, some did express their support that this wasn’t the same rule as the more controversial change initially scheduled to be implemented in April.

A package of contraband covered in grass clippings that was dropped by a drone at a Panhandle prison is one of the most recent examples of inmates using advanced technology to smuggle illegal items behind prison walls.

Report: If Lawmakers Don't Do Anything, Fla. Prison Population Will Increase

If Florida lawmakers don’t do anything policy wise soon, the state’s prison population could increase. That’s according to a report commissioned by the Florida Senate to promote the need for prison reform.

A new report paid for and released by the Florida Senate finds that while the state is sending fewer people to prison than in the past, those who end up behind bars are staying there for a longer time.

The study from the Crime and Justice Institute based in Boston says there are nearly 100,000 inmates housed in Florida prisons, and the per capita incarceration rate in the state is more than 20 percent higher than the national average.

Florida lawmakers are working on a measure they hope will help the children of incarcerated parents move forward faster. Fort Lauderdale Democratic Representative Patricia Williams has a bill she says would help to map out a plan for parents and their children.