The endangered Key deer herd was already coming out of a tough year — the herd lost more than 100 animals to New World screwworm.

So when the eye of Hurricane Irma crossed the Lower Keys as a Category 4 storm, wildlife managers were worried. The Lower Keys is also the only place on the planet where Key deer live.

"The numbers are looking like we still have, even on Big Pine and No Name [keys], around 960 deer — which is a lot," Clark said. "It's a testament to their resiliency." 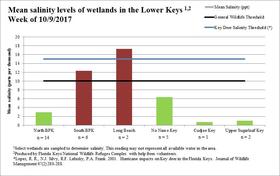 The biggest concern immediately after the storm was the lack of freshwater. The Lower Keys were inundated with a storm surge of saltwater. Refuge managers provided kiddie pools and other receptacles of freshwater to help the herd get through until rains replenished the freshwater lens.

And while water was welcome, refuge managers strongly discourage providing food for the deer. Pet food, cracked corn and other food put out by well-meaning people can harm the deer, either directly through ingestion or by encouraging them to venture close to roads where they are hit by cars.

The fall is the deer's annual breeding season, or rut, and biologists conducting surveys saw evidence of the deer out and about, Clark said.

"Even after the screwworm, anecdotally, we saw that there was a lot of fauns and we may see that this year, too," Clark said. "Deer in general, when they have a stress and they come back out of it, they tend to reproduce a lot." 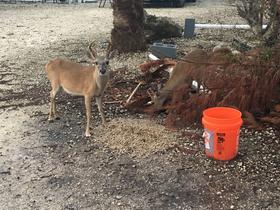 While the deer are the highest-profile endangered species in the Keys, the refuge is also responsible for protecting a host of other plants and animals that may not have fared as well in the storm, Clark said.

Surveys are just starting to try to find out what happened to the various rare plants, butterflies and other animals, like the Lower Keys marsh rabbit.

Wildlife officials say a screwworm infestation in the Florida Keys seems to be declining, which is good news for a unique deer herd threatened by the flesh-eating parasites.

People in the Keys have been living alongside Key deer for a long time. And for ages, wildlife officials have implored people: Don't feed the deer.

Due To Irma, Some Lawmakers Warning Constituents About Funding For Local Projects

Due to Hurricane Irma, Florida lawmakers are warning their constituents that they may not have a lot of money this year for local projects. It comes as legislators across the state hold legislative delegation meetings where the public, local governments, and organizations outline their funding requests.