Hundreds of students from around the state rallied at the Florida Capitol Wednesday. They joined Parkland students to promote their gun control cause and convince lawmakers to look into what they see as better policies.

At a rally on the steps of the old Florida Capitol building, many students held up signs, like “Am I Next?” and “I shouldn’t be scared when I open the door.”

One of the Marjory Stoneman Douglas high school students who say she’s still scared to go to school is Sheryl Acquaroli.

She’s one of the more than 100 Marjory Stoneman Douglass high school students who arrived in Tallahassee this week. Most arrived by bus Tuesday night. They included 18-year-old senior Diego Pfeiffer, who says he appreciated the support from Tallahassee students who welcomed them. 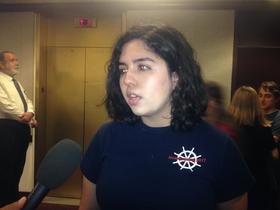 By morning, the group of students marched to the Capitol to let their voices be heard. Diego’s sister, Isabella, was one of the few who spoke to Senate leadership.

“So, obviously many of us in this crowd knew who Nikolas Cruz was,” she told Senate President Joe Negron. “He was very erratic, very violent, and he was expelled. So, how was it possible that this boy that we all knew was clearly disturbed was able to get an assault rifle—military grade—and come to our school and try to kill us? Would an extensive background check would have prevented this? Do you believe that?”

“I think it may have,” Negron replied. “It may have prevented him from obtaining this particular weapon. And, that’s something we want to look closely at to make sure that we’re doing everything we can as a government, as a state, and as fellow citizens to ensure that people with a known mental illness history or people who have exhibited violence tendencies in the past—which is clearly what you’re saying—that they should not be in possession of any type of weapon, let alone this particular type of weapon. So, you make a good point.”

Following the meeting, Isabella says she felt Negron said what she called “a very important line.”

“….which was mentally ill persons should not have an assault weapon, right? But, I felt he didn’t really address the issue of whether people who aren’t recognized to have a mental disorder should also have a background check, which I think is necessary just because  many people are just not diagnosed yet,” she said, at the time.

Still, the 16-year-old says she won’t give up. And, she’s actually talked to other lawmakers. In fact, she says she spoke to two—whose names she wouldn’t disclose—about their rationale Tuesday’s procedural vote on the House floor not to take up a bill on the assault weapons ban.

“…that it really hadn’t been vetted thoroughly enough, that it was really a fly by the wing of our pants kind of bill,” Isabella stated. “So, if we can vet this further, and we can establish it on sturdier grounds, then we get those votes.” 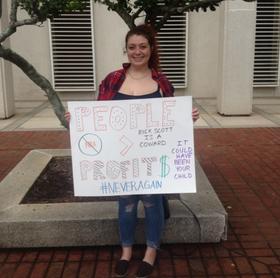 This “Never Again” movement has also inspired a lot of other students to come forward—some even college age. Reading from her sign, Florida State University senior Jessica Devito says this hit close to home for her since she’s from the South Florida area.

“It says ‘it could have been your child,’ because that’s true,” she said. “And, that goes to show, especially because it’s so close to home for me. And, when I saw it was a South Florida high school was shot up, I thought it was mine.”

Now, the 22-year-old says she’s fired up and wants things to change. But, she says she’s not talking about a wholesale ban on guns—just assault weapons.

“I think that if you have a gun that’s small, and you can’t shoot people in masse, and you want to use that for your protection, that’s fine,” Devito added. “I understand that. I have a Republican father that feels that way, and I totally get it. But, there’s no reason to have a gun that can kill that many people in such a short span. For the military, sure, but not for a regular person.”

Meanwhile, the Florida Senate agreed Wednesday to postpone a vote on two gun-related bills. That includes a bill that would have allowed designated people to carry guns on school grounds attached to a place of worship.

While thousands of students were in Tallahassee Wednesday to push for stronger gun laws after last week’s shooting in a high school in Parkland, teenagers across Florida walked out of class in a show of solidarity.

Students who survived the Parkland school shooting prepared to flood the Capitol on Wednesday, pushing to ban the assault-style rifle used to kill 17 people and vowing to make changes in the November election if they can't persuade lawmakers to change laws before their legislative session ends.

From Bellingham To Tallahassee Students 'Walk Out' Demanding Gun Reform

In the seven days that have followed the massacre at Marjory Stoneman Douglas High School that killed 17 people, students from the Florida campus have moved from terror to grief to activism, inspiring a national youth-led protest against political inaction on gun reform.

On Wednesday, the Parkland students — still mourning and fueled by anger — made their way to the state capitol in Tallahassee to confront lawmakers to demand a ban on assault weapons.

As high school students who survived the shooting in Parkland, Fla., travel to the state Capitol to demand action on guns, lawmakers offered a glimpse of the battle they face.

In Tuesday's session, which opened with prayer for the community of Marjory Stoneman Douglas High School, where 17 students and staff were killed last week, Florida House lawmakers declined to open debate on a bill that would ban assault weapons and large-capacity ammunition magazines.