With Increasing Alligator Sightings, FWC Urges Floridians To Be Careful 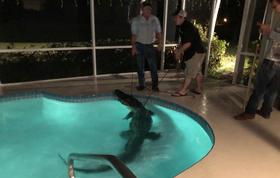 Florida’s 1.3 million alligators inhabit all of the state’s 67 counties, and wildlife officials are urging the public to be careful around the reptiles. The warning comes as some gators are turning up in unlikely places.

“This is my view today, as I’m working at Junque in the Trunk,” said Denise Nichols-Gearhardt, in the above YouTube video.

Early last month from her shop, she saw an alligator walking on the sidewalk of a Flagler Beach strip mall.

The latest Florida sighting occurred over the weekend, when the Sarasota County Sheriff’s office got a call about an 11-foot alligator in a backyard pool. The below video shows a trapper contracted with the Florida Fish and Wildlife Conservation Commission trying to catch it and drag it away.

So, why these alligator sightings right now? Not only is it close to mating season, FWC Spokeswoman Tammy Sapp says the reptiles are more active in the Spring.

“So, this time of year, alligators become more visible because when temperatures rise, their metabolism increases and they begin seeking prey items,” she stated.

Sapp says there are some simple, precautionary measures people who live near water can do to reduce their chances of conflict. It’s also outlined in the below FWC PSA:

“Alligators are important to Florida’s natural areas, and are found throughout the state. The FWC wants you to know that by following a few simple rules, we can coexist with these amazing animals. First, never feed an alligator. And, keep your distance, if you see one. Keep your pets on a leash and away from the waters edge. Be sure to swim during the day and only in designated areas.”

Sapp says there’s a number of reasons why these rules are in place. First, she says feeding alligators can allow them to overcome their natural wariness and learn to associate people with food. Alligators are also most active between dusk and dawn. So, swimming during the day in a designated area is a must. And, Sapp adds her agency also has a hotline to address alligator complaints.

“Now, if you have a concern about a specific alligator, that you believe poses a threat to people, pets, or property, we want you to call our toll-free Nuisance Alligator Hotline anytime at this phone number: 866-392-4286 or 866-FWC-GATOR,” Sapp continued.

Gator Found In Backyard Pool As Reptiles Warm To Spring

Florida homeowners beware: one big gator has been found splashing in a backyard swimming pool and it took a trapper to drag it away.

Video of a massive alligator caught walking through a Florida nature reserve in front of stunned onlookers has prompted crowds of people hoping to catch their own glimpse.

A fishing guide and Lakeland City Commissioner saved a dog named Dixie from an alligator's jaws while cleaning up after Hurricane Irma.