Immigration Legislation Moves in House But Stalls In Senate

While a raft of immigration legislation is moving through the Florida House, similar proposals in the Senate appear to be on the back burner. 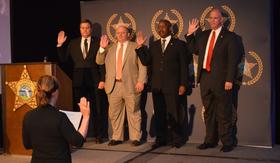 Another Florida county is now on a list of governments the feds accuse of refusing to cooperate with immigration officials. The Department of Homeland Security said the Marion County Sheriff’s Office declined to hold two suspected illegal immigrants after they were due to be released from custody in February. Republican Rep. Larry Metz wants to stop Florida counties from declining Immigration and Customs Enforcement requests. Metz has a bill that would eliminate all sanctuary policies and require state and local governments to comply with detainer requests.

Metz introduced legislation banning sanctuary jurisdictions in the state last year. But it didn’t move in the Senate. And Metz said he’s not sure it will pass this year either.

“The apparent lack of interest in my bill both last year and this year signals to me somehow, I don’t know how I can trace it back, but someone in the Senate in a position of authority, whether it’s a committee chair or somebody else seems to be against banning sanctuary jurisdictions in Florida,” he said.

“The appetite for that committee is not for immigration reform or sanctuary city reform," he said. "Which is unfortunate, but that’s just the cards that we were dealt to go through that committee.”

Critics of the proposals label them mean and xenophobic.

Another immigration related bill moving in the House comes from Republican Rep. Dane Eagle. His measure makes sentences tougher for undocumented people who commit crimes like sexual assault or murder committed by undocumented people. If it passes, Florida would be the first state to have such a rule. But Eagle says he has no concerns it would pass constitutional muster.

“When it comes to some violent felons, we need to lock them up and throw away the key," he said. "And what we are talking about here is violent felons, where are taxpayer dollars should be going to incarcerate them.”

Senate Minority Leader Oscar Braynon said in January it’s unfair to punish someone because they’re an immigrant. He says Eagle took a lot of stuff out of the legislation to make more palatable.

“More comfortable than the previous bill," he said. "Yes? Am I still voting no? Yes.”

Senator Travis Hutson’s companion bill on increasing penalties based on immigration status is also in its last committee. But it’s been stuck there for more than a month.

Metz does have one piece of legislation related to immigration on the House floor. It’s a symbolic request to Congress asking the federal government to let states require proof of citizenship when registering to vote. All voters certify under oath they are citizens. But Metz said he doesn’t think that’s enough.

“But it should be acted on," he said. "It’s a very clearly worded memorial that addresses three areas of statutory interpretation that have constrained the state’s ability to ensure the integrity of their voter rolls with respect to non-citizens voting in elections.”

Bean said he would likely vote in favor of the House immigration proposals. But he’s not holding out a lot of hope they’ll make it through the Senate. For Florida Public Radio, I’m Sarah Mueller.

It’s spring break and for some kids that means going to the beach or visiting family, but for 40 children and teenagers from South Florida it means delivering an important message to President Donald Trump.

The trip to the White House started outside the office of Miami-Dade Mayor Carlos Gimenez Monday with a protest against the mayor’s compliance with President Trump's immigration policies.

A Quick Explainer: What's The Rift Between Florida Sheriffs And Homeland Security?

This week, sheriffs across Florida publicly challenged the Department of Homeland Security for singling out agencies it says won’t help enforce immigration law. Meanwhile, sheriff’s offices are accusing DHS of misleading the public in a request, citing the agency for making requests that would violate people’s civil rights.