At this time, direct impacts from Hurricane Florence are not expected in Florida. However, large ocean swells will begin arriving along many of the Sunshine State's Atlantic beaches Monday. As a result, the rip current risk will be high for several days and minor coastal flooding will be possible during times of high tide. 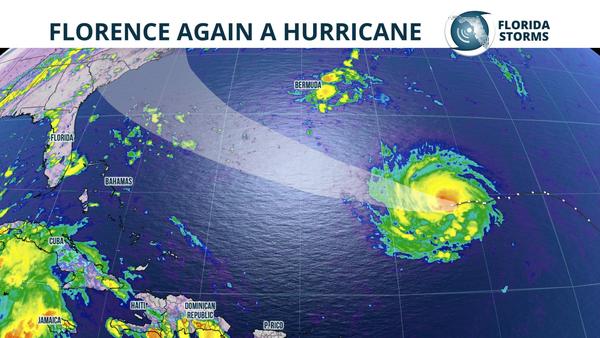 In their 5 pm Sunday advisory, the National Hurricane Center said Hurricane Florence was located 720 miles southeast of Bermuda and had maximum sustained winds of 85 mph. According to Hurricane Specialist Eric Blake earlier Sunday, those wind speeds were likely to dramatically increase in the next 24 hours.

Hurricane Specialist @EricBlake12 from the @NHC_Atlantic on Hurricane #Florence: "Almost all of the intensity guidance is showing at least one period of rapid strengthening during the next few days,which is rather rare." #flwx #scwx #ncwx #gawx

Coastal and inland residents from South Carolina to Virginia have been advised that the risk of life-threatening flooding from Hurricane Florence is increasing, both from storm surge and heavy rain. The major hurricane is projected to slow in forward speed and may even stall as it approaches the coast Thursday or Friday. Due to the typical uncertainties that exist on a storm's track and strength this far out, the storm surge unit from the National Hurricane Center has advised specific forecasts related to Florence would not be available until Tuesday.

While the risk of dangerous storm surge from #Hurricane Florence continues to increase, it is much too soon to provide detailed information. Detailed forecasts would likely be issued by Tuesday. Always heed recommendations from local officials.— NHC_Surge (@NHC_Surge) September 9, 2018

A State of Emergency has been declared by the governor's of South Carolina, North Carolina and Virginia in preparation for direct impacts from Hurricane Florence. As of Sunday afternoon, tropical storm force winds were more likely to arrive along portions of the coasts of South and/or North Carolina by Thursday morning. Based on the current forecast at the time, hurricane force winds were most likely to come ashore Thursday night somewhere between Myrtle Beach, South Carolina and Morehead City, North Carolina. The range of uncertainty on a possible landfall extends from just north of Savannah, Georgia to about 100 miles north of Norfolk, Virginia.