In Hurricane-Battered Area Of The Keys, Neighbors Become A Lifeline

Every few weeks, Fred and Melissa Bach host a neighborhood barbecue at their home in the Avenues, on Big Pine Key. Fred’s watching the grill, a barrel shaped rig with a smoker on the side. There are ribs, chicken, salmon — all sizzling and smelling good.

A neighborhood cookout on a Sunday afternoon is a normal thing in most places. But here, in this neighborhood full of mobile homes and ground level houses, these barbecues are a rare refuge of normalcy. 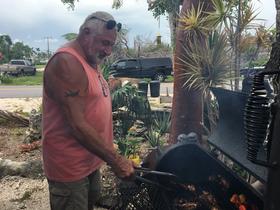 "I call it disaster island now," Fred said. "We're only three or four left on the street that's livable. There's four, five, six houses — gone. Just on this block alone. You go to the next block over, it's even worse."

After Irma flooded the Bachs’ ground level mobile home, they had to gut it. They're not alone: many of their neighbors continue to rebuild. But Irma also brought the Avenues neighborhood together, even as it tore individual homes apart.

The Bachs got it done with the help of a church group from North Carolina and a grant from Home Depot. Their son works at the store in Marathon. Another son drove down from Michigan with $70 worth of lumber. It was meant to be used to build wooden pallets but the Bachs turned it into new siding for their house, inside and out.

The couple have become a resource for a lot of their neighbors who are still trying to rebuild.

"They’re still using our shower — we’ve got an outdoor shower and I built an outdoor kitchen because in the beginning, we didn’t have anything inside," Fred said. "So we were cooking out here and some of the neighbors still show up and do it, because they still don’t have it together."

Julia Grattan works for Project Hope. She goes door to door in the Keys, letting people know where they can find help recovering from the hurricane. She says people have been reluctant to use support groups.

"I’ve tried to get some groups together, but that’s not been too successful," she said.

Some people don’t want to meet in a church, fearing the meetings might involve religion (they don’t). For many, there's a stigma about seeking therapy or counseling — and some Keys people pride themselves on their independence and resilience.

So they gather at neighborhood cookouts like the Bachs'. They can share information and talk to people who know what they’re going through. And it’s a reunion for people who have had to move out of the neighborhood. 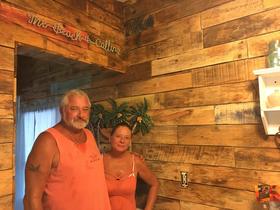 Julie Silver and Chaz Stefano both lived on Avenue C but didn’t meet and become a couple until after the storm.

They put Silver’s trailer back together enough to make it livable. Then there was a fire.

They take a walk during the barbecue to look around the old place. Silver finds it painful to look at the charred remains of her former life.

"That was our back bedroom. Everything’s gone," Silver said. "There’s our couch — you can see the frame. Brand new leather couch. Everything gone."

Stefano does maintenance at a local bar. Silver made a living doing laundry for people.

For now, Silver and Stefano are living on a different island a couple miles away, in a travel trailer on his sister’s property. They’re hoping an online campaign can help get them back to Big Pine.

"We need a place to live, of course," Silver said. "I’m not picky and choosy. I could take another trailer."

But Silver and Stefano don't plan to leave the Keys. They just want enough money to get back to living in their own place on Big Pine. They’re planning on getting married in October.

For the Bachs, Irma has meant the end of retirement, or any prospect of it. But they have no plans to leave the Keys either.

Melissa Bach said she’s been amazed to see so many people helping. One couple at the barbecue came all the way from Boca Raton. They started gathering donated furniture from the mainland and driving it down after the storm. They’re still doing it.

"I don’t think everybody would be as close as they are now, if something like this didn’t happen," she said.

All drivers entering Key West are again being greeted by a large painted sign welcoming them to "Paradise USA."

Survey teams this week completed an assessment of the condition of the Keys reef tract, from Biscayne Bay to Key West.

"It's very much like what's observable on land," said Sarah Fangman, superintendent of the 2,900-square-nautical-mile Florida Keys National Marine Sanctuary. "In some places, the impacts are pretty dramatic and visible and in other places they are much less. So we're finding the same is true underwater."

Even in the same location, the hurricane's impacts differ.

Key West To The World: Come On Down

In some parts of the Keys, people are still salvaging what they can of their belongings, or figuring out where they will live.

In Key West, local and state leaders gathered Wednesday to send one message: they are open for business.

"Restaurants are open. Hotels are open. Every tourist in the country, in the world, needs to come back to Key West and the Florida Keys," said Gov. Rick Scott.

He spoke at an oceanfront hotel flanked by Key West officials and tourism promoters who were carrying conch shells and waving Conch Republic flags.