How The Parkland Tragedy Has Changed Policing Across Florida

One year ago, Michael Riggio was second in command of the New York Police Department's Counterterrorism Division. But just months after the February 2018 mass shooting at Marjory Stoneman Douglas High School in Parkland, he left the post to lead a new project at the Broward Sheriff’s Office.

Captain Riggio is currently the commanding officer of the Threat Management Section, a specialized unit created by the Broward Sheriff’s Office in the aftermath of the tragedy. The mission: to identify and intercept threats of violence in the community, including at schools.

“I would say since MSD, probably this year alone, we've investigated 500 to 550 threats,” said Riggio. “I won't get into the names of the schools and the people, but there have been some incidents where we have gotten some good intelligence from the community that was brought in a confidential manner and we've found people in schools that did want to commit violence and those people were placed under arrest.”

Listen
Listening...
/
A sweeping law passed after the shooting at Marjory Stoneman Douglas High School in Parkland has changed how police are able to do their jobs. WLRN's Danny Rivero reports.

In the year since the tragedy in Parkland, police departments across the state have adjusted their policing strategies to address threats of violence in the community. The Marjory Stoneman Douglas High School Public Safety Act, which was passed the Florida legislature weeks after the shooting, mandated a number of changes, including putting more police in schools and engaging with troubled individuals.

Like other police departments across the state, Riggio’s unit has regularly been issuing “red flag” orders to people in the community -- a core part of the new law that allows police to confiscate any firearms from someone designated as a “high risk person.” The measure also puts them on a state list blocking them from purchasing firearms.

“It’s a nice tool to put in our toolbox to help us do our job,” said Riggio. 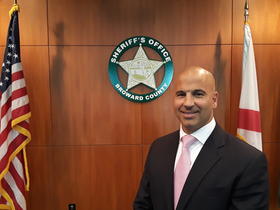 The red flag actions are technically called “risk protective orders.” To issue one the police department has to go before a judge and explain why someone should not have access to guns. This often involves sharing threats the person has made and other evidence. If granted, an order is valid for up to a full year, and can only be extended after another court hearing.

“This was overdue,” said Habsi Kaba, the head of Crisis Intervention Team training for the Eleventh Judicial Circuit of Courts in Miami-Dade County. Across police departments in the county, Kaba is known as the go-to person for mental health and de-escalation issues.

“Officers were desperate,” she said. “Police departments, command staff were desperate to help someone who they had identified as dangerous, actively dangerous, going to the range with delusions, practicing target shooting. Yet -- police could not do anything about that.”

After the new law went into effect, the Miami-Dade Police Department also created a new unit dedicated to address threats of violence in the community. But unlike the unit at the Broward Sheriff’s Office, Miami-Dade’s Threat Management Section takes pride in the fact that it has not made a single arrest.

The Section acts as a kind of in-house social work division of the police department. After a troubled person comes on the team's radar, a detective is assigned that case. The officer meets with the person on a regular basis, pushing them to see a psychiatrist and take medications, and helping connect them with social services. Officers seek permission to access medical and psychiatric information so they can speak freely with caregivers.

“It’s totally different from being a patrol unit, uniformed officer on the road,” said Detective Latasha King, who has been with the team since it launched in June of 2018. “We’re still officers at the end of the day, but we perform a slightly different duty. We’re here to help you.” 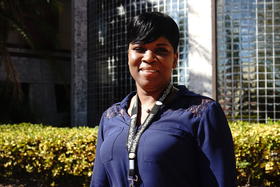 On the day we met, King is meeting with a man who came on the team’s radar after he made threats to family members. He was not arrested for the threats, but the department filed a red flag order on him to make sure he does not have access to firearms. Police in Miami-Dade have been granted 57 red flag orders between March and November of last year, according to state records.

The man asked WLRN not to name him to protect his privacy and mental health condition.

“In the beginning, it was really tough. He didn’t want to give us any information,” said King. “But once you build a rapport with them, you make them feel comfortable -- I can say we talk about a lot. Also, I talk to his therapist and we’re good. He’s really good, good reports from everybody and I just love the changes. He has changed a lot.”

The man is a college-aged Asian-American, who recently started taking culinary studies classes.

“[I’ve interacted] with many police officers. I mean like, I cuss them out, whatever,” he said. “But Detective King, I don’t see her as a police officer. I see her like a motherly figure. Like, way better than my mother actually because she’s actually there for you, man.”

He has the detective’s number, and sometimes he calls her when he needs to talk.

A core component of the new unit at the Broward Sheriff’s Office are conversations with people designated as high threats and letting them know they are on the office’s radar, said Riggio. He called it a matter of “deterrence.”

“Maybe a crime has not been committed. But if they’re on our radar they’re on our radar for a reason, and at some point we are making contact with them to conduct an interview to sit down with them about the reasons where they are,” he said. “We need to talk to them about what we're hearing and they need to know that the Broward Sheriff's Office is aware of who they are and what they've been accused of.”

“We take this seriously and if we find that there's anything wrong we're going to be arresting people for their conduct and their behavior,” he added.

Adilen Cruz is with South Florida Behavioral Health Network, the non-profit that manages state dollars for substance abuse and mental health treatment for Miami-Dade and Monroe Counties. Getting police departments more proactive about addressing mental health concerns and threats in the community represents a change of protocol for the better, she said.

“The officers go out there and engage them as people and not just because of a crime, and bring them into treatment, or facilitate access to treatment, and that relationship continues when they follow up with the individual,” said Cruz. “That has never happened before.”

“This is new policing,” she said.

A key House committee approved a bill Wednesday to require background checks for all sales and transfers of firearms, a first step by majority Democrats to tighten gun laws after eight years of Republican rule.

Most people who get shot survive. That’s true here in South Florida and across the country.