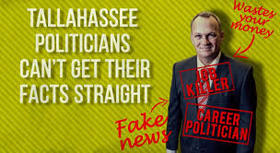 The two Republicans are trading insults in mud-slinging attack ads, the latest of which calls Corcoran a fake news peddler and career politician. Corcoran told reporters he’s grateful Scott hired him to do legal work during a hard time in his life, but he won’t change his position.

The Florida House is tightening the noose around two state agencies.  The idea faces high hurdles in the Senate and the governor’s mansion, but the fight sets the stage for big cuts as lawmakers develop spending plans.