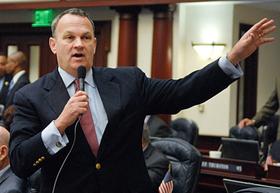 The Land O’ Lakes Republican says everything from gasoline reserves to hardening the electrical grid is on the table.

High on the list, Corcoran says, will be a response to the heat-related deaths of eight Broward County nursing home residents.

“Maybe it’s stiffer penalties for non-compliance. Maybe it’s more transparency. There’s a lot of ways that we can move towards protecting the health, welfare and safety of our citizens and we’re going to do that in the most results-driven way and we’re going to see what that looks like.”

In a move certain to increase tensions in an election year, Corcoran is also asking all lawmakers to forego individual member projects and direct all discretionary spending to hurricane recovery and mitigation.

Some good news and bad news signal Florida state government is slowly returning to normal in the wake of Hurricane Irma.

Still reeling from the aftermath of Hurricane Irma, Florida may soon embark on a costly list of fixes and contentious changes to state laws, including whether or not to require nursing homes to have on-site generators to deal with power outages.

With the deaths of nine residents of a Broward County nursing home after Hurricane Irma, U.S. Sen. Bill Nelson, D-Fla., and U.S. Sen. Marco Rubio, R-Fla., want to create a national panel that would look at meeting the needs of seniors during disasters.

Hurricane Irma wreaked havoc not only on people and buildings, but on nature. Birds were pushed by the winds from the Caribbean into Florida, and the Category 3 storm washed away beaches and bird habitat in the Everglades and Florida Keys. WUSF's Steve Newborn talks with Eric Draper, executive director of Audubon Florida, about Irma's impact.

Here's some of the impacts outlined by Audubon Florida: