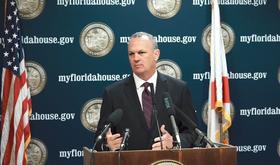 Florida House Speaker Richard Corcoran says he won’t raise taxes—either directly or indirectly. Corcoran took aim at the Florida Senate, stating he will also fight any plan that allows an increase in property tax revenue through higher property values to be counted toward public school funding.

How to fund public schools has become a point of contention in recent years, with Governor Rick Scott and the Florida Senate wanting to use an increase in property tax revenues. But Corcoran calls that a tax increase and says its a no-go:

“It is a debate the Senate seems to want to have, and if they want to have it, we’ll have it. We will travel up and down this state. Because no matter where you go, ask any single individual, any community any city any county and they will tell you it’s a tax increase. It’s a tax increase any time government takes more money from you this year than they took last year and it was through no account of your own.”

As property values go up, so does the revenue they generate, and public schools are partly funded on what's called Required Local Effort--a percentage of local property tax bills.

Corcoran is also backing a constitutional amendment proposal that would make it harder for the legislature to raise taxes, requiring a three-fifths vote by both the house and senate in order to do so. That same proposal is backed as well by Governor Rick Scott. Corcoran is in his final term as House Speaker and it’s been widely speculated that he is mulling a run for governor this year.

Following a tumultuous year that witnessed the Republican-controlled Florida Legislature get mired in scandals and finger-pointing, GOP leaders kicked off a new session on Tuesday where they promised to clamp down on sexual misconduct and pass sweeping education bills.

Florida House Speaker Richard Corcoran, R-Land O'Lakes, is filing a lawsuit to stop what he calls an illegal tax being charged by the city of Tampa.

The Republican legislator announced the lawsuit on Thursday. The lawsuit is part of a series of moves Corcoran announced to go after local economic development and local tourism marketing agencies.