House, Senate Healthcare Dispute Shows Up In $4B Gap In Spending Plans 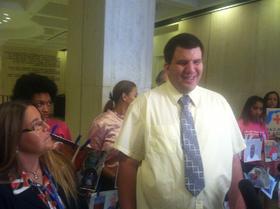 Continued uncertainty over federal health funding is causing budget pains in the Florida legislature. The House and Senate have a $4 billion  gap in their proposed spending plans for the upcoming fiscal year—and that’s largely due to disagreements over the biggest part of state spending: Medicaid.

The first floor of the Capital is swarming with people dashing back and forth—some pushing frantically at the slow-running elevators, others giving up—and dashing up the stairwells instead. Off to the side, is 23-year-old Broward resident Matt Ross.

“I don’t have any services, I work a part time job, holding a sign at a busy highway," he explains. " I’ve been looking for jobs, but due to limited bus schedule and autism, I can’t work a register and a list of other job functions.”

Ross joined the healthcare advocacy group Florida Chain in support of a Senate plan that draws down tens of billions of federal dollars to insure about a million low-income Floridians in what’s known as the Medicaid coverage gap. They make too much for the state’s current Medicaid program, but too little for the federal government’s insurance exchanges.

The Senate’s budget proposal includes that money. The chamber is also crafting a plan to include another $2 billion in federal funding called the Low-Income Pool, which expires in June. But neither of those federal programs, are in the House’s budget. And they won’t be,House Healthcare Appropriations Chairman Matt Hudson told his committee earlier in the week.

CMS is the federal Centers for Medicare and Medicaid Services. Negotiations are ongoing when it comes to the low-income pool. And the House remains opposed to using the additional federal Medicaid dollars.

“Right now, that chasm between the House and Senate looks sizeable but I’m an optimist, I think we’ll get it worked out. I think President Lee is a great guy, the Speaker is working with President Gardiner and I think those are things we work through as the weeks go on," he told reporters Thursday.

Meanwhile, other parts of Florida’s budget aren’t shaping up the way lawmakers may have hoped.  The potential loss of federal money, coupled with the House’s continued reticence toward expanding Medicaid—means fewer dollars for areas like Education, as former Senate President Don Gaetz explains.

“Notwithstanding that, The President has provided additional funding to us. Probably not as much as he or any of us would have hoped if circumstances had been different, but the fact is we will have additional funding in the proposal from this committee—a 4 percent increase in FEFP funding," Gaetz said.

The House and Senate’s education spending plans also fall short of what Governor Rick Scott wanted, but they still represent a slight increase in overall education funding from the current year.

Meanwhile, there’s one place in the budget that is seeing a boost—environmental spending…although that too is shaping up to be a source of conflict. More than $700 million  is expected to be generated from the passage of the land-conservation plan, Amendment One. However the state’s main land-buying program, Florida Forever—is set to get its budget slashed more than 80 percent in the Senate’s budget proposal--Something backers of Amendment One say sis wrong.

“LIP is completely separate from Medicaid expansion,” Scott says.  “If you go look at Texas, go look at California, one expanded Medicaid, one didn’t, and both of them are getting significantly more dollars under LIP than what Florida’s getting today or ever gotten.”

Nelson: Feds Won't Back Down on Health Care Aid

Florida Sen. Bill Nelson says the Obama administration won't back down on cutting off over $1 billion in aid to Florida hospitals if the state doesn't expand its Medicaid program.

Speaking to reporters, the Democratic senator said Department of Health and Human Services Secretary Sylvia Burwell told him her position on the aid is firm.

The aid pays hospitals for providing care to the indigent. It's supposed to end because Obama's health care plan provides indigent care through the Medicaid program.

Florida's natural springs would get $50 million, the Kissimmee River is in line for $30 million, and a wastewater plan for the Florida Keys is up for $25 million, under a newly released House proposal that would help carry out a voter-approved increase in conservation dollars.

But there are few other clearly outlined projects in a $772.1 million proposal for next fiscal year released Tuesday by the House Agriculture & Natural Resources Appropriations Subcommittee. The proposal is focused more on land management and water projects than on new land acquisitions.