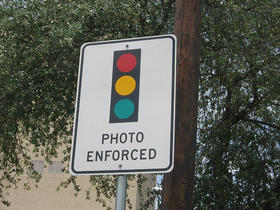 Unlike police officers, redlight cameras can’t use discretion, and for bill sponsor Representative Bryan Avila, that’s a problem. He gives the example of a woman driving her neighbor to the emergency room. The city had installed a camera right near the entrance.

“Seeing that she was in a situation that felt that her life was in peril, she proceeds to tell her neighbor, listen there’s a redlight camera here. Take all the precaution necessary, but I need you to get me to the ER right now,” Avila says.

Avila says the neighbor paused, looked both ways and continued through the redlight. Later the city sent her a ticket. Assuming officials would understand the circumstances, Avila says she appealed the citation.

“The city of Tamarac says, we can’t do anything. It’s in state statute,” Avila says.

And because the woman appealed the cost of the ticket went up from about $150 to more than $250. Avila says that story is proof cities aren’t placing redlight cameras in the interest of public safety. Instead they’re using them as a revenue source. Opponents of the cameras also say the devices tend to be tied to an increase in crashes—specifically rear-end crashes at intersections. But Orlando Democratic Representative Carlos Guillermo Smith wonders if that data could be misinterpreted.

“Do you think it’s possible that the trend of an increase in accidents," Guillermo Smith says, "which is a nationwide trend that accidents are increasing, is actually tied to the increased use of smart phones and texting while driving on the road?"

Meagan Sirjane-Samples from the Florida League of Cities says that could be the case. In fact she says a second look at that same data actually indicates crashes are down thanks to the cameras.

“The only two types of crashes that can be directly attributable to the intersection light are down at red-light camera intersections.  In the report, crashes that involve actually running the red-light are down 3-percent and crashes involving pedestrians who use the crosswalk at intersections are down 19 percent. Other crashes within the 250 feet radius are up, but vehicle crashes are up 33-percent statewide over this study period,” Sirjane-Samples says.

Sirjane-Samples says the state should let municipalities decide what steps to take to ensure their intersections are safe. Despite those concerns the bill cleared its final vote in the House. But the road looks bumpier in the Senate, where the measure stalled in its first committee.

A legislative effort to ban red light cameras throughout the state of Florida is back. But, as in years past, it’s sure to encounter opposition from one of the cameras’ original champions.

Members of the House Appropriations Committee faced a tough decision Tuesday when a widow and traffic-safety activist begged them not to repeal a red-light camera law named after her former husband.