David Williams and Alex Massie sat side by side at W.P. Franklin Lock along the Caloosahatchee River, waiting for something to nibble at their fishing lines. They were catching fish to eat, despite high levels of fecal bacteria recently closing down a beach just a few yards from their fishing spot.

Williams, of Alva, said he's been fishing along the Caloosahatchee for 65 years. He's lived off of the river. And he's not concerned about the high levels of E. Coli in the water.

"It's just a happening thing," Williams said. "There's nothing you can do about it."

He said that he's never been sick a day in his life--no ailments that a little vinegar couldn't cure. 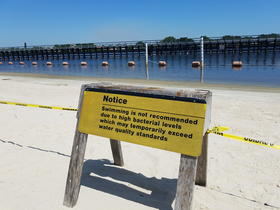 Since meeting Williams at the W.P. Franklin Lock, there was some rain and the E. coli levels have lowered. The beach that had been closed nearby was reopened.

But John Cassani, with the Calusa Waterkeeper, said he wouldn't be so hasty to eat what's swimming around in the river.

"The E. coli can accumulate in the mucus on the coating of the fish in some cases," Cassani said. "I wouldn't take a chance with that, especially since these bacteria levels are elevated in other areas."

Cassani said people shouldn't have to be accustomed to having tainted water.

"It's not normal," he said. "It is a significant public health risk."

The source of the E. Coli hasn't been determined yet. No one seems to know if it comes from humans or animals.

But fisherman Williams has his own theories.

"It's the runoff [water] and the pollution from it," he said.

Alex Massie, Williams' fishing buddy, caught a blue crab. He said he wasn't going to eat it. But Massie intended to eat what was in his bucket.

"Those are mullets," he said. "We're gonna filet them out and eat them."

"I've been eating out of here for 20-something years," he said.

While the coast is clear for W.P. Franklin Lock in the Caloosahatchee, the rainy season is approaching, a time when the waterways are more susceptible to this kind of contamination.

Wrapping up work from the 2018 legislative session, Gov. Rick Scott on Friday signed 17 bills and vetoed one measure, which he said could “muddle” Florida’s efforts to protect its underground water system.

Activists are abandoning a federal challenge of Florida’s water quality standards after the Trump Administration refused to step in.