Here's Another Reason To Love South Florida's Clear Ocean: It Keeps Sharks Away From You

Earlier this month a swimmer was attacked by a shark at Haulover Beach in Miami-Dade County. That person suffered no life-threatening injuries, but the attack was shocking because it was so rare. In the last 135 years, there have only been 15 total attacks in Miami-Dade.

Stephen Kajiura is a professor of biological sciences at Florida Atlantic University. We discussed why you’re safer from shark attacks at Miami Dade beaches compared to beaches further north in Brevard and Volusia counties, where there are a lot more attacks.

Listen
Listening...
/
Stephen Kajiura studies sharks at Florida Atlantic University. He says attacks are rare in South Florida compared to beaches further north in the state, because the water is clearer here.

KAJIURA: One of the interesting points about South Florida is that we have beautiful, warm, clear water,  and that enables the sharks to determine that you are not a prey item. You're a big thing. You're not a little fish that they would typically feed on. You contrast that to the waters further north, like New Smyrna or Daytona, where they have more shark attacks than anywhere else in Florida. That water is rather murky and as a result the sharks simply don't have the visual acuity to determine if that's a little fish or maybe just a shiny palm of your hand or sole of your foot. And as a result that's why you get more bites up there. But down here, where they can actually see what you are, we’re pretty much left alone.

WLRN: So the clearer the water – the safer we are? Is sight the main sense sharks are using?

Sharks certainly rely on a whole suite of sensors to bring them closer to their prey. They can smell blood from a larger distance away and then as they get closer they rely on other senses. They can hear, they can feel the movements, they can see, and when they get very close they can use their electro receptors. But by the time they're close enough to bite you they can clearly see what you are. And I think that's why the vision is so important. They can see that yes, you're human, you're not a little fish, and as a result they'll tend to stay away.

What are the most common sharks we see in South Florida waters, especially this time of year?

The shark composition really varies seasonally. In the wintertime we have huge numbers of black tip sharks which come down and spend the winter in Southeast Florida, and they're here by the thousands, right adjacent to the shore. Other times of the year we have a lot of bull sharks. We have some great hammerheads and lemon sharks on occasion. So it really sort of varies by location, but maybe the most common ones that are around here are the nurse sharks and they're most likely the ones to leave you alone.

Florida leads the world in shark attacks. Unlike beaches in South Africa and Australia, the other places with large numbers of shark attacks, we don't use shark nets to protect swimmers. Why not?

One of the concerns with using shark nets is that shark nets are not a fence. They don't keep out sharks. What they actually do is kill the sharks and thus reduce the populations. Well, we don't really want to do that. We want to maintain a safe environment for the swimmers. But killing the sharks doesn't necessarily do that because what it does is you knock off a lot of the top-level sharks but that will sometimes lead to more of the medium-sized sharks being in the area. And so it might not actually make the environment safer.

Florida continues to grow, as does the number of visitors. What do you foresee is going to happen with the number of attacks and how lethal those attacks may be in the coming years?

Certainly the number of attacks has been increasing in Florida, and that's correlated directly with the increasing population here. We're seeing more bites because – not because there are more sharks -it's simply a matter of more people in the water going forward. I think Florida is going to continue to have this large influx of residents who come down here and move to Florida. And so you're probably going to see more and more bites on people. It's simply a matter of numbers. 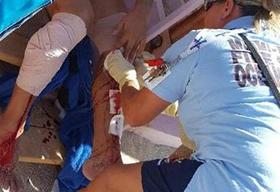 The attack at Haulover Beach was rare. And it’s believed the shark was a bull shark. What creates that scenario where a shark attacks a human?

There are a couple of reasons why a shark might want to lash out. On the one hand shark bites might occur because the shark does mistake a person for food. Let's say you are paddling around on a surfboard and you may appear to be a typical sort of prey for the animal. And so that might account for some of the bites. In other cases the humans have actually provoked the animal in some way. I can think of examples where you have shark-like feeding operations where people are deliberately feeding the sharks and as a result the people get bit. And then in other cases simply boxing an animal in, where it is feeling threatened it has to do something; it will often swim out in a way and in the process bite the person, again not deliberately but just to get out of the way.

What would you say to city and state leaders about how to keep swimmers and sharks safe as we plan for the future?

I think it's a great thing to see an increase in shark populations. It's indicative of a healthy ecosystem, we want to promote that. The best way for humans to get along with sharks is through education. We need to inform people about the best times to go swimming. We can't eliminate the sharks. That's not environmentally responsible. And we can't keep people out of the water. That's just no fun. And so you want to have the people in the water, but you want them to enjoy the water safely. And so really the only way to do that is to teach them the best way to enjoy their time at the beach.

And what are a couple of the pointers you might give swimmers, for example, about the best way to stay safe and what are those best times?

Take advantage of the fact that you have beautiful clear days, lots of sun, so go out in the middle of the day when you get good visibility and you can see the sharks and sharks can see you.

Avoid swimming when the water is murky, when sharks simply can't make out if you're a prey item or not.

Avoid swimming under low light conditions like at night or at dusk or maybe really early in the morning at dawn. Again, this is when the most incidents could occur due to poor visibility and mistaken identity. So enjoy the water when it's nice and sunny and clear and stay out of the water at other times.

Also use common sense. If someone is fishing and chumming the water or something, don't go swimming around there. That's just asking for trouble.

How about you? How often do you swim in the ocean?

I love getting into the beach. I don't get there nearly often enough,  but whenever I do I like to look for them because it would be to me fantastic, it would be really exciting if I got to see a shark when I was out there swimming. I have never experienced that yet. So hopefully one of these days I'll be able to be out there when there's a shark cruising by.

2015 Sets Record For Most Shark Attacks, With 98 Worldwide

“Oooooh, a shark! Look! That's the one that ate Nemo!"

Keriann Roque ran up to the glass where she pointed out a shark swimming in the tank a few feet above her head. She gasped as it circled around to swim closer. The 12 year old was at the Florida Aquarium for a summer camp field trip.

She said learning more about sharks has made her less afraid of them.