Here’s What Your Next Driver License Will Look Like

The Florida Department of Highway Safety and Motor Vehicles (DHSMV) is rolling out its next generation Driver License and ID cards. 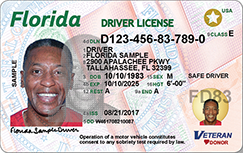 The new design has nearly double the fraud protection measures compared to the previous design, according to DHSMV.

More than 200 service centers are coming online with the new licenses through December. All new credentials issued after January 1 will have the new look.

Current licenses will remain valid until they are replaced or are phased out.