TweetShareGoogle+Email
Listen
Listening...
/
Click here to hear the audio version of this story, which aired on WUSF 89.7 FM.

The Obama administration said Friday it's making progress trying to correct a tax-form error that affected 820,000 customers of HealthCare.gov. 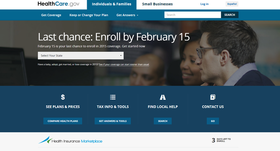 Administration officials said 740,000 corrected forms have gone out to consumers in the federal insurance marketplace, and another 80,000 will be mailed next week.

Health officials say thousands of consumers are still waiting to receive a corrected tax form detailing the amount of subsidies they received to help pay their monthly premiums.

This form is a big deal in Florida, where more people signed up using HealthCare.gov than in any other state.

"So any individual who has enrolled in marketplace coverage, and who received an incorrect form 1095-A, and who filed his or her tax return, will not need to file an amended tax return.," said Mark Mazur, assistant secretary for tax policy with the U.S. Treasury Department. "The IRS will not pursue the collection of additional taxes from these individuals based upon any updated information or corrected forms."

Treasury had previously offered the same leeway for consumers in the 37 states served by HealthCare.gov, the federal marketplace. The Treasury action amounts to a reprieve from paperwork headaches for early tax filers.

The issue involves a new government form called a 1095-A.

It's like a W-2 form for health care for people who got subsidized private insurance under President Barack Obama's law. Consumers who got health insurance tax credits need the information on the 1095-A to file their taxes.

HealthCare.gov CEO Kevin Counihan said some customers may still have other errors on their forms, like the wrong coverage dates. He urged them to call HealthCare.gov at 800-318-2596.

Counihan estimated that 3 percent to 4 percent of customers may have some of these other errors on their 1095-A forms. That translates to between 120,000 and 160,000 households.

Several million Americans hit with new federal fines for going without health insurance are getting a second chance to sign up, and that could ease the sting of rising penalties for being uninsured.

But as the enrollment window reopened on Sunday in Florida and the 36 other states that use the federal health insurance marketplace at HealthCare.gov, it’s unclear how many know about the time-limited opportunity, let alone will take advantage of it.

The deadline to buy health insurance coverage for 2015 has come and gone. But some people without insurance are just finding out now that they have to pay a tax penalty, and they're getting another chance to sign up.

Federal health officials announced Friday morning that they’re offering a new, special open enrollment period for consumers who are preparing their 2014 taxes now and figuring out that they owe a tax penalty under the Affordable Care Act.

FL Has Highest Number of Enrollees

Florida has eclipsed California to become the state with the highest number of consumers buying health coverage through new insurance markets under the Affordable Care Act, according to federal statistics released Wednesday.