Thousands reacted this week to a photo of residents sitting waist-deep in floodwaters at an assisted living facility in Dickinson, Texas. The town did not issue a mandatory evacuation order ahead of Tropical Storm Harvey. The photo, and Texas officials' decisions to not evacuate, could have ramifications for emergency plans for Florida’s elderly residents. 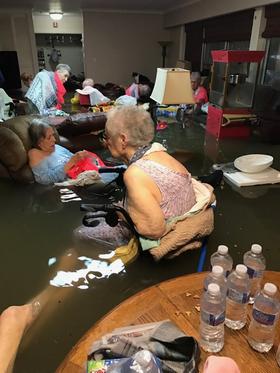 Leaving behind the medical infrastructure of an assisted living facility is not an easy decision to make. Traffic gridlock, lack of supplies and heatstroke can be deadly. In the past, some evacuations have led to more deaths than storms themselves. Shad Haston heads the state’s assisted living association. Despite the difficulties, he says after Harvey more Florida facilities may opt to evacuate regardless of local orders.

“I think you will see that a lot more facilities take the cautious approach and evacuate, even if they don’t believe evacuation is necessary,” he said.

But the uncertainty of evacuations, especially unnecessary ones, worries him.

“I’m not saying that’s a good thing. Because I don’t know, for example, what Houston’s emergency response would have been to so many people on the roads at…a given point of time. Whether they would’ve been able to handle that," he said.

Haston says Harvey is spurring Florida facilities to re-evaluate their plans. It’s likely, he says, many would arrange to send residents to other facilities in the region.

According to the state’s directory, Florida has more than 3,000 assisted living facilities with an estimated 73,000 residents.

Harvey regained tropical storm strength as it drifted in the Gulf of Mexico toward Texas early Thursday and forecasters said it could become a hurricane.

Harvey Weakens Over Louisiana As Houston Copes With Record Rainfall

The National Hurricane Center says Harvey is now a tropical depression. As of 8 p.m. ET, the storm was located southwest of Alexandria, La., with sustained winds of 35 mph.

As Tropical Storm Harvey, it had made landfall in Louisiana, at 4 a.m. Central time, just west of Cameron, according to the Center.

The confirmed death toll from Harvey is at least 25, across five Texas counties — although that figure is likely to rise and does not include people who are missing or believed dead.

In Houston, reservoirs swollen by rain from Hurricane Harvey were opened early Monday, a move that was expected to flood more homes — but one that the Army Corps of Engineers says is needed to limit the scope of the disaster that's threatening lives and property in Texas.