Florida’s Haitian immigrants are getting a six month reprieve on deportation orders. Advocates are claiming a small victory, but the timeline falls short of what many hoped for. Some are worried the community’s special status may be coming to an end. 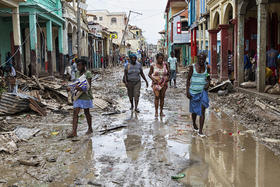 In a storefront church just a few blocks from the state capitol, a couple dozen worshipers pray and sing in Creole and French, at the Eglise Bateau de l’Evangile de Jesus Christ.

Pastor Hugues Balde says God led him away from a high-paying job in New York to create a church, and a new home, for the Haitian community in North Florida. Now he’s hoping for more divine intervention, this time for immigrants who fled the island country after the 2010 earthquake.

“They lost everything when the earthquake happened. If you go to Haiti, it is still like a desert. Right now it is flooded. Problem after problem. There is no such thing as Haiti recovered,” Balde said.

After the disaster, the federal government let about 58,000 Haitian immigrants settle and work legally in the U.S. About half came to Florida. They’re allowed to stay until the country is ready to take them back. Now the Trump Administration is implying that time has come. Balde isn’t in the program, but he has family members who are.

“Listen, the stress on those people right now is unbelievable,” Balde said.

The administration is extending the temporary protective status or TPS program for another six months. But that timeline falls short of the eighteen months advocates hoped for.

“What about those who have kids born here? So they have to leave the kids if the kids are underage, and the parents have to be deported? What are they gonna do?” Campbell asked.

Critics say the program is designed to be a temporary fix, not a long-term solution. She wants to reform TPS too. 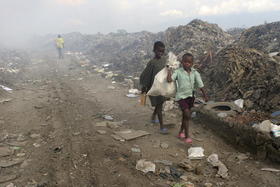 “A long-term goal to me is to give them amnesty or give them a green card. And I think that’s what we all should voice for to get a long-term goal for these people who have been waiting for so long,” she said.

“I am opening the door to anybody who wants to go to Haiti, especially from the administration. I am willing to go with them. I can interpret. I can show them around. But what is important is they see firsthand what is going on in Haiti,” Jacquet said.

Governor Rick Scott wants the administration to extend the program too. He met with Homeland Security Secretary John Kelly before the decision came down.

“I mean this is a federal issue. I brought this to the attention of the federal government. And you know it’s one of the frustrating things as governor, you don’t have control over immigration policy,” Scott said.

Back at the church, Balde says deporting some 58,000 people en masse could undo the progress Haiti has made. According to the World Bank, 25% of the country’s GDP comes from remittances, expats sending money to family and friends back home.

If Balde’s sister is deported, her kids might have to drop out of college too. It would be up to him to provide for them, as well as his father, sisters, and cousins who are already in Haiti.

In the meantime, he says he’ll keep praying. If the administration doesn’t extend the program again, deportations could begin in January of 2018.

A Florida lawmaker is criticizing the federal government’s temporary extension of special status for Haitian immigrants. After the 2010 earthquake, the federal government allowed thousands of Haitians to take refuge in the U.S. This week President Donald Trump extended those protections again, but by six months, not the eighteen months advocates hoped for.

Thousands of Haitians that are under Temporary Protected Status (TPS)  in the United States  since the 2010 earthquake in the island received on Monday a six month reprieve, in what many advocates and activists in South Florida fear is the last extension of the immigration program.

Marleine Bastien, director of  FANM or Haitian Women of Miami,  says it seems like this is six-month notice for Haitians to prepare to leave the country.

Is the presidential candidate who threw promises to Little Haiti throwing a dragnet over it now that he’s President?

Candidate Donald Trump pledged to Haitian-American voters here that he’d be their “greatest champion.” But the Associated Press reports the Trump Administration is fishing for criminals among Haitian immigrants – specifically the 50,000 Haitians living in the U.S. under Temporary Protected Status, or TPS.