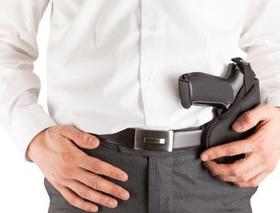 A bill allowing people to carry a gun without a license during a mandatory evacuation as part of a declared state of emergency cleared hurdles in both the House and Senate Wednesday.

National Rifle Association’s Marion Hammer is a huge backer of the bill, which failed to pass last year.

“This is the same bill that passed the House overwhelmingly last year,” Hammer said, during a House Criminal Justice Subcommittee hearing Wednesday. “The only difference is the amendment that was just added that defines the amount of time—48 hours to evacuate.”

The measure failed in the Senate, after the Florida Sheriffs Association, at the time, argued the language was too loose. After Wednesday’s hearings, both House and Senate measures now gives a time limit of 48 hours for the amount time people have to evacuate with their firearms. It can also be extended, if need be—provisions the Sheriffs are now on board with. While the House bill passed its first hearing, the Senate has one more committee stop before it heads to the floor.

In what judges described as a first-of-its-kind case, an appeals court Wednesday upheld a Florida law that prevents people from openly carrying firearms, finding that the restriction does not violate constitutional rights to bear arms.

The ruling by a three-judge panel of the 4th District Court of Appeal stemmed from the 2012 arrest in Fort Pierce of Dale Norman, who was openly carrying a gun in a holster. A jury found Norman guilty of a second-degree misdemeanor charge, leading to the appeal on constitutional grounds.

Recent shootings around the country have left many reexamining police departments and policies. But they've also led to a renewed focus on personal protection with increased gun sales and a legislative proposal to allow guns on college campuses.

A federal appeals court recently upheld a Florida law that limits what doctors can tell their patients about gun ownership.

Doctors claim that it’s their First Amendment right to ask any question they want of their patients including questions about guns. The backers of this law say keeping records on whether they have guns in their homes violates their Second Amendment rights.