Former U.S. Sen. and Florida Gov. Bob Graham says the Legislature’s decision not to fund Florida Forever is a blatant violation of Amendment 1, the 2014 conservation amendment. 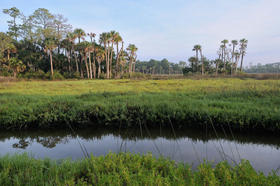 To paraphrase, old government programs never die, they just fade away. Florida Forever is no exception.

Earlier this week, a state panel voted to preserve 40 thousand acres along the northern Apalachicola River by adding it to the Florida Forever list. The irony that lawmakers didn’t fund the iconic land conservation program this year wasn’t lost on Defenders of Wildlife activist Kent Wimmer.

This is exactly the type of project that needs to be acquired and this is why you need to appropriate the money that voters voted for, to make happen.”

Before the recession, Florida Forever was the biggest program of its kind in the nation. Lawmakers routinely appropriated $300 million a year to rescue wilderness acres from the bulldozer.

When lawmakers left funding slow to a trickle, environmental groups passed Amendment 1 in 2014. It sets aside roughly a third of an existing tax on real estate and orders lawmakers to spend the money on land conservation.

Less than a year after Amendment 1 passed, Environmentalists were in court.

“We’re not challenging all of the Legislature’s expenditure of the funds, but we’re challenging approximately $300 million in that first year, and we think they’ve done similar things in subsequent years.”

That’s Manley Fuller, president and CEO of the Florida Wildlife Federation. Fuller and other Amendment 1 drafters figured the courts might have to step in.

In the last two decades, when voters ordered lawmakers to build more schools to shrink class size, or draw political boundaries without favoring one party, they got ignored.  Or so says Graham .

Graham, meanwhile, has been blasting lawmakers for not funding Florida Forever in recent interviews and webinars. Graham is a Democratic icon. But environmental icon Nathaniel Reed, who is associated with former Republican administrations, is also crying foul.

“I find it absolutely reprehensible to go against the will of 75 percent of the citizens and voters of Florida, who passed Amendment 1 with the clear understanding that the absolute maximum amount of money was to be spent to acquire the very best of what’s left of Florida.

Graham is hoping the Constitution Revision Commission holds the answer.  The powerful panel meets every 20 years to update the constitution and has the power to put measures directly on next year’s ballot.

Graham says he might push for an amendment allowing citizens to essentially pass their own statutes, which can be more specific than amendments. Or…..

“A provision in the Constitution that would say there is a presumption that citizen- initiated amendments to the Constitution are self-executing, and do not require the Legislature to act to put them into effect.”

Veteran EarthJustice lawyer David Guest, who filed the Amendment 1 lawsuit on behalf of the environmentalists, is intrigued. But he doesn’t think it would work for issues like Florida Forever funding.

“The problem is, if you went to court, what would you say? You’d say well you were supposed to spend it on land acquisition. And the Legislature says, well, we decided we couldn’t. What land did you want us to buy? You want the court to negotiate land deals?”

The case is currently parked in the First District Court of Appeal. But it will likely be decided by the Florida Supreme Court.

Guest says the most successful citizens initiatives, like a net ban, are prohibitive instead of prescriptive. In other words, they outlaw an action instead of requiring lawmakers to perform one.

“The big picture here is the really big difference in how courts operate as compared to the executive and legislative branches.”