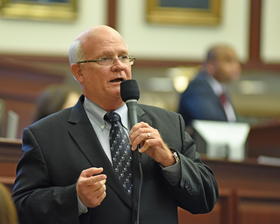 Florida Governor Rick Scott has signed off on a controversial measure offering additional protections for religious expression in schools.

“Not everyone believes in god,” Gibson says.  “And therein lies the problem.  Because I think the premise of this bill is that that is the case, and that everyone is a Christian—and that’s not the case.”

But the bill’s sponsor, Sen. Dennis Baxley (R-Ocala) believes the measure is meant to clear up any confusion

“We owe our educators some clarity on this so it can be applied uniformly across the state,” Baxley says, “and in a way that does respect every faith or no faith.”

Perhaps in a preview of what’s to come, the Palm Beach County school board last week discussed eliminating a policy that allows organizations to place religious banners on school property.  The board made the change after Chaz Stevens, a provocateur known for adding a Festivus pole to holiday displays in the state capitol, requested a banner for the Church of Satanology.

A bill aimed at protecting displays of religious faith in public schools passed the Senate on nearly party-line vote Thursday, while a more-limited version moved toward the House floor.