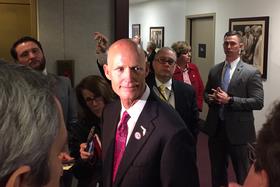 “So the first thing I did was I asked her to recuse herself, and I talked to her and she said she wasn’t going to, so I moved the case to Brad King," Scott says.  "Last week she said she was fine with that.  Today she’s changed her position."

"And so the case has been assigned to Brad King, and that was the right decision,” Scott says.

King is an outspoken proponent of the death penalty—speaking many times in favor of non-unanimous jury sentences before legislative panels last year.  More recently he applied to fill a vacancy on the state Supreme Court.

Days after Gov. Rick Scott signed a law effectively putting the state's death penalty back on track, a newly elected Central Florida prosecutor stunned legislators Thursday by announcing she will not pursue death sentences for any capital cases during her time in office.

Florida juries would have to unanimously decide that defendants convicted of capital crimes should be put to death for the sentence to be imposed, under a measure that lawmakers rushed to pass during the first week of the annual legislative session.