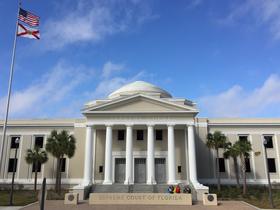 A few words among Florida supreme court justices mumbled on a hot mic, has the governor looking for answers.  The exchange came at the end of a high profile hearing over who will name three upcoming vacancies on the Supreme Court bench.

Shortly after the conclusion of oral arguments, Justice Barbara Pariente leans over to Chief Justice Jorge Labarga, points at a piece of paper and they exchange a few words.

Through a public records request, Governor Scott is seeking copies of the document and raw audio tape from the microphones in the courtroom.

“We expect judges to be impartial, we expect them to simply do their job,” Scott says.

The case has high stakes for the future of the court.  Three of its liberal leaning members will step down as Scott’s term in office comes to a close, and he says it will be up to him to name their replacements.  Two voting rights groups are urging the court to block Scott’s move and put it in the hands of his successor.

Arguments before the Florida Supreme Court are often lively, with the black-robed justices peppering highly prepped attorneys on matters of law ranging from the esoteric to the mighty.