Gov Scott Distances Himself From Trump's Comments But Not Trump 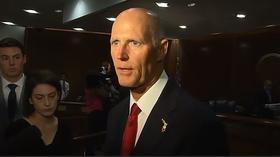 Florida Governor Rick Scott is repudiating President Donald Trump’s comments but not the president himself.  Trump in recent days has equated the actions of white nationalists with those of the men and women who marched in opposition.

Rick Scott is joining prominent GOP politicians breaking with Donald Trump’s most recent appraisal of the violence in Charlottesville.

“There’s no moral equivalency between the two sides,” Scott says.  “Let’s remember what happened on Saturday—a white supremacist murdered a young woman that’s about the same age as my daughter.  I believe 19 people were harmed.”

Scott went on to urge lawmakers at levels of government—including the president—to focus on unity, and Attorney General Pam Bondi echoed those sentiments.  But neither longtime Trump supporter appears willing to desert the volatile president.

The University of Florida is refusing to allow white nationalist leader Richard Spencer to speak on campus next month, citing “serious concerns” about safety in the aftermath of a deadly weekend clash in Charlottesville, Va.

Florida House Speaker Richard Corcoran is vowing to continue to fight what he calls “evil” ideologies. Speaking to reporters Monday, he stated the evils of “Neo-Nazism and white supremacy” need to be stomped out—after the violence that erupted at a protest in Charlottesville, Virginia.

The Florida father of a protester killed when a car plowed into peaceful protesters in Charlottesville says his daughter was passionate about equality for all. Mark Heyer of Cocoa Beach tells Florida Today he's proud of his daughter. He is calling for forgiveness.

Updated on Monday, 08/14 at 5 p.m. to include comments from local activists, council members.

Jacksonville City Council President Anna Lopez-Brosche is calling for the city’s Confederate statues, memorials and monuments to be moved off of public property and into museums or other educational facilities.

The violent confrontation in Charlottesville and its aftermath have galvanized elected leaders on both sides of the aisle.  Florida Democrats are planning voter registration rallies in response.