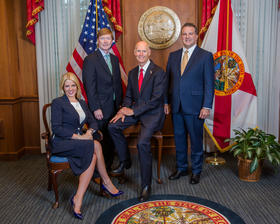 Scott says he wants to avoid the violence that has come from similar events in other states.

“I believe in the first amendment rights that people have,” Scott says, “I do expect people to be safe—I won’t condone any violence.”

“You have three primary jobs,” Scott says, “help people get a job, make sure the kids get a good education and keep people safe.  That’s part of making sure we keep everybody safe.”

Scott declared a state of emergency Monday for Alachua County.  His order commits state law enforcement resources, and even the National Guard if necessary, to coordinate with local officers.  Attorney General Pam Bondi says it’s the right move in light of the speaker’s track record.

“This guy’s out there espousing violence and hatred and anger,” she says.  “And if we know that he’s going to be there doing that it’s our duty as a state—and I commend the governor for having the resources available on the front end.”

Richard Spencer leads the National Policy Institute, a white supremacist think tank listed as a hate group by the Southern Poverty Law Center.  He was among the top speakers lined up to speak at a Charlottesville rally in August that descended into violence—leaving one counter protester dead after a man drove his car into a group of demonstrators.

Earlier this year the University of Florida refused to host him citing concerns about safety, and Spencer threatened a lawsuit.  The school agreed to the later date because it cannot limit free speech as a public institution.

Vibhor Nayar spends most of his time at the University of Florida studying mechanical engineering.

But as president of the UF Indian American Student Association, the senior from Fort Lauderdale is distracted by Thursday’s expected arrival of a white nationalist group on the Gainesville campus.

When Hurricane Irma was bearing down on Florida last month, Gov. Rick Scott declared a state of emergency. On Monday, he did the same thing in Alachua County, ahead of a speech by white nationalist Richard Spencer at the University of Florida in Gainesville.

State Of Emergency Declared In Alachua County For White Nationalist

Citing past clashes and protests, Florida Gov. Rick Scott on Monday declared a state of emergency in advance of a speech white nationalist Richard Spencer is scheduled to give at the University of Florida.

Governor Rick Scott is declaring a state of emergency in Alachua County in advance of white nationalist Richard Spencer’s speech on Thursday at the University Florida.

A brewery that was offering to give free beer to University of Florida students in exchange for tickets to a white nationalist event on campus has learned that the stunt won't work.