Governor Rick Scott spoke to reporters with a caged Florida panther present Tuesday at Gator Park in Miami. He announced that $150 million will go toward Everglades restoration this year and $5 billion throughout the next 20 years. Part of the plan he announced funds projects to protect panthers-- 2014 was a bad year for panther deaths. The other part is to move, clean and store Florida’s water supply. 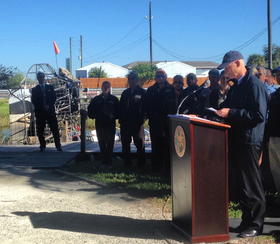 "We will first focus on finishing projects that can provide storage to protect our estuaries and their everglades within the next four years," the governor said. "These projects alone will store more than 100 billion gallons of water."

Eric Eikenberg is the CEO of the Everglades Foundation, a non-profit that strives to protect the Everglades. He was at the governor’s talk.

"This is the shot in the arm to ensure that we finish projects -- projects that have been underway for a number of years, projects that are still needing to be funded," says Eikenberg.

But he says the governor’s plan won’t just restore the Everglades, he says it will also create jobs. These projects require engineers, architects and other graduates of science, technology, engineering and math majors.

"Everglades is a perfect example of how S.T.E.M.-based careers are ensuring that we restore this, America's Everglades," Eikenberg said.

The Florida cabinet approved a pair of land purchases Tuesday that it says will aid in efforts to manage water retention in Southwest Florida.

In an unusual move, the Florida Department of Economic Opportunity objected to a proposed development plan in Hendry County.

Florida County Goes To Court Over 'Acid Fracking' Near Everglades

Collier County has charged that state regulators have been lax in their oversight of the drilling, jeopardizing public health and the environment.

An internal review board at the U.S. Army Corps of Engineers wants more time to finalize a report on an Everglades restoration project with a pressing deadline.

The Corps' Civil Works Review Board met Tuesday in Washington to discuss the Central Everglades Planning Project. It concluded that "while the analysis and project plans are extremely well done," more time is needed before the project report is ready for a final 30-day review by the state and other federal agencies.