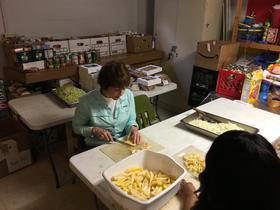 The Trump administration’s decision to end temporary protected status for Haitians who sought shelter in the US after a major earthquake is drawing bipartisan pushback in Florida.

Speaking at an event preparing food for Thanksgiving, Democratic candidate for governor Gwen Graham says the decision horrifies her.

“I don’t know if anybody has seen any photos of Haiti, or looked at what the status of the country is now, but they are far from a place that we should we suspending temporary protected status for.

Major contenders running for Florida governor are getting a chance to give their campaign pitch to reporters and editors from across the state.

The Associated Press is holding its annual pre-session planning day on Thursday at the Capitol. The session starts in January.

Three Democrats and two Republicans running for governor in 2018 are scheduled to appear.

Gov. Rick Scott is leaving office in early 2019 due to term limits.

Gwen Graham Serves Up Cuban Sandwiches And Campaigning In Tampa

Gwen Graham wants to follow in her father's footsteps and move into the governor's mansion in Tallahassee. So she's copying Bob Graham's "work days," and served up Cuban sandwiches Thursday in Tampa.