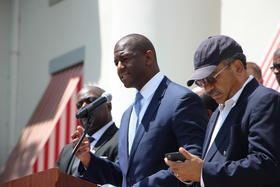 Tallahassee Mayor Andrew Gillum’s campaign has released receipts from trips Gillum took in 2016 with lobbyists to Costa Rica and New York City. The disclosure comes amid the Florida Commission on Ethics’ probe into a complaint about how the trips were paid for.

Tallahassee City Hall critic Erwin Jackson filed the complaint. He claims lobbyists paid for Gillum’s trips. Gillum’s campaign says the gubernatorial candidate met with the State Ethics Commission Tuesday. Following the meeting, the campaign released copies of receipts for certain expenses related to both trips, neither of which Gillum says were related to his mayoral post.

One is a $400 cash withdrawal Gillum says he used to pay for his “share” of a villa in Costa Rica, which he shared with lobbyists Adam Corey and Sean Pittman. But Corey’s lawyer, Christopher Kise, told the Associated Press his client never received cash reimbursement from Gillum. Kise also told the AP Corey won the accommodations in a charity auction.  Corey is connected to an FBI investigation of corruption in Tallahassee government.

During the trip to New York, Gillum was accompanied at times by undercover FBI agents. Together, they saw a Broadway musical, which the campaign said was provided by Gillum’s brother through a “swap” for another concert ticket.  Gillum has produced a bill for his hotel stay, and says his airfare was paid for through his other job with the foundation People For The American Way.

The campaign for Ron DeSantis, Gillum’s competition in the race for governor, is calling the Democrat’s release of documents “incomplete.”

Racism immediately became an issue in the Florida governor's race Wednesday as both nominees made predictions: The Democrat said voters aren't looking for a misogynist, racist or bigot, while the Republican said voters shouldn't "monkey this up" by choosing his African-American opponent.

But top of mind were his recent remarks on Fox News blasting Tallahassee Mayor and Democrat Andrew Gillum’s liberal policies. He told the anchor voters shouldn't "monkey this up" by choosing his opponent – a black man.

Tallahassee Mayor Andrew Gillum won the Democratic primary for Florida governor Tuesday, pulling off an upset against better funded and better known candidates on his quest to become the state's first black governor.