Gillum And Corcoran Square Off On Sanctuary Cities 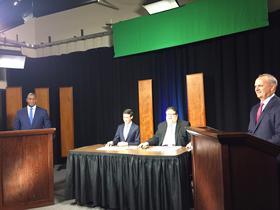 Gillum is a Democratic candidate for governor and Corcoran, a Republican, is expected to join the race. Gillum pushed Corcoran to debate the issue after the speaker released an ad depicting an undocumented immigrant shooting a young woman.

Gillum calls the ad offensive and says the speaker should apologize and take the ad down. The video shows a man wearing a hoodie shooting a young woman as she walks through her neighborhood. Corcoran told a group of reporters Tuesday the ad isn’t a portrayal of a specific event, but the ad ends with Corcoran telling the story of Kate Steinle.

But many say the ad mischaracterizes the Steinle story. Steinle was killed in 2015 when a homeless undocumented immigrant, Jose Ines Garcia Zarate, found a gun under a park bench in San Francisco. The gun accidentally discharged and a bullet ricocheted off a nearby building before hitting Steinle. A jury found Zarate not guilty in Steinle’s death.

Corcoran has made HB 9 a priority this legislative session. He says the measure would ban sanctuary cities by requiring law enforcement to hold undocumented immigrants they’ve arrested for 48 hours after notifying federal officials. It’s a move he says will help to protect the state’s citizens by keeping what he calls undocumented criminals off the streets. Gillum argues the process violates due process because a person may be arrested, but that doesn’t mean they’ve been charged. But Corcoran says an undocumented person doesn’t have due process rights.

Gillum says the safety of Floridians is his priority too. He worries the policies in HB 9 could hamper law enforcement officers who are already struggling to earn and keep the trust of community members. He says that is a concern Tallahassee Police Chief Michael DeLeo had expressed.

“One of the major issues for law enforcement in our city is individuals who will not share information. We do not want to exacerbate it,” Gillum said.

HB9 passed on a 71-35 vote in the House, but appears to be stalled in the Senate.

Florida gubernatorial candidate Andrew Gillum and Richard Corcoran continue to spar over immigration policies and in the latest—the Tallahassee Democratic mayor has challenged the Republican state house speaker to a debate.

Democrats Rep. Shevrin Jones (D-West Park) and Tallahassee Mayor Andrew Gillum are speaking out against preemption policies. They’re pushing back against what they view as quote “the war on local communities.”