Gay, Black Democrats Ask GOP: Why No Gun Control After Violence In Our Communities?

The negotiation and passage of Senate Bill 7026 — a 100-page gun control and school safety measure that is awaiting Gov. Rick Scott's signature —  prompted some Democratic lawmakers to question whether LGBT and black victims of gun violence matter less to Republican leaders than white, affluent ones.

Listen
Listening...
/
Listen here to the audio version of this story.

During many hours of emotional debate over the measure crafted in response to the nation's deadliest high school shooting, Democrats repeatedly asked their Republican colleagues why they responded in an unprecedented way to the Parkland massacre but did little when 49 people were murdered at a gay nightclub in Orlando in 2016.

“I have called the question of whether or not the lives of LGBTQ people of color matter,” said Rep. Carlos Guillermo Smith, an Orlando Democrat who is Latino and gay and has worked as a gay-rights activist.

Many black lawmakers also protested the Legislature’s inaction to address gun violence that often takes the lives of children in minority communities across the state. They listed the names of black kids who have been killed by stray bullets in their front yards or their living rooms.

“I feel as if I’ve been screaming loud — but silent,” Rep. Bobby DuBose, a black Democrat who represents Fort Lauderdale, said while debating the bill on the House floor Wednesday. “We’ve been screaming for decades: ‘This is a real issue.’ And no one has listened.”

When a group of parents from Parkland came to Tallahassee for a lobby day recently, they worried if they didn't support the limited proposal for gun control that was working its way through the Legislature, they might get nothing at all.

One parent said to state Sen. Gary Farmer during a meeting in his office: A bill that would have banned assault weapons was introduced in 2016, and it went nowhere. 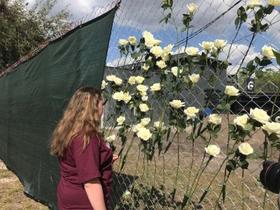 "So how do we know, if we don't support this bill, that the same thing's not gonna happen?" Deborah Ventura asked.

The Fort Lauderdale Democrat — who wanted the parents to push harder for more aggressive gun control policies — stressed they shouldn't waste squander the moment's overwhelming urgency for action because of the Feb. 14 massacre at Marjory Stoneman Douglas High School.

But, the parents said: In 2016, there were 49 dead nightclub goers in Orlando. At the time, the mass shooting that targeted a Latin night at Pulse was the deadliest in American history.

Pulse was different, Farmer said. He argued the Legislature’s Republican leaders — most of them white men — weren’t as motivated to do something about a shooting with victims who were LGBT and Latino as they were after a tragedy that affected a predominantly white, affluent community like Parkland.

Florida’s incoming House speaker, Republican Rep. Jose Oliva of Miami Lakes, “was asked why now, and why not after Pulse,” Farmer told the Parkland group gathered in his office.

“If you heard his response, he kind of said, ‘kids are more important than gay people,'" Farmer said, offering his interpretation of Oliva's answer.

The parents gasped. “Oh my god,” one said. “Is he okay?” asked another rhetorically.

That’s not what Oliva said.

During the news conference Farmer was referring to, the Republican leader argued there were key differences between what happened at Stoneman Douglas and what happened at Pulse: The Legislature wasn’t in Tallahassee in June 2016 when Pulse was attacked, whereas the high school shooting happened right in the middle of this year’s lawmaking session. Also, the tremendous activism of the student survivors of the Stoneman Douglas shooting and their parents has had an effect.

(Critics have pointed out: there were calls for a special session that summer, but the Legislature refused to return. And Pulse survivors demonstrated for change, too.)

When asked later about Farmer’s characterization of his comments, Oliva said he was disappointed some politicians sought to “capitalize on the emotions of parents and the emotions of children.

“I think it says much more about Senator Farmer than it does about me,” Oliva said.

The back-and-forth illustrates how raw and tense the gun debate has been at the Capitol. It wasn’t an isolated conflict.

On Tuesday, House Republicans spent hours shredding amendments proposed by Democrats. All of them — nearly 40 — were voted down. But a proposal from Smith to add a $1 million appropriation to the bill for a Pulse memorial got the most yes-votes: 49.

The same number of people supported the proposal as those who died in the Pulse shooting. It was an eerie coincidence that was seen in the Senate, too, a few days before. On Sunday, 17 senators — the same number as those killed in Parkland — supported amendments that would have outlawed assault weapons or instituted a two-year moratorium on the sale of AR-15s. They were defeated, as well. 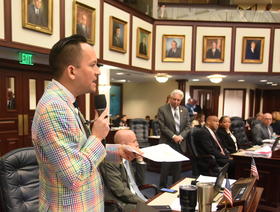 Smith wanted to match the $1 million in the bill earmarked for an on-campus memorial at Stoneman Douglas.

“Perhaps we can appropriate the same amount toward the construction of a memorial in Orlando for the 49 angels who were taken there, since there has not been any city, county, state or federal funds to date that have contributed to the building of a Pulse memorial?” Smith said while the bill was being considered on the House floor.

Oliva responded that there is money included for the memorial of Stoneman Douglas shooting victims because students, parents and teachers asked for it. And he said he would be willing to continue the conversation about a Pulse memorial at a later time. But he said he had concerns about making a "celebrity" out of a mass shooter by erecting a memorial to his victims.

Later, Smith pressed Oliva again: Why is there action being taken now, but there was none after Pulse?

"My community really wants to know, why didn't the Legislature act ... to address the epidemic of gun violence?" Smith said.

Rep. Jeanette Núñez, a Kendall Republican, was presiding over the session. She asked Smith to limit his inquiries to those directly related to the bill and to question Oliva at a more appropriate time, perhaps privately.

"To say that this particular event and some other event had no response is a binary view of something that is not true," Oliva said. "It is the accumulation of things like this that warrant action.

"I don't want people to go away thinking that there is a greater value placed on certain lives, that there are not on others," he said, adding Parkland was "the last straw, ... but not the only straw."

Smith said he’s frustrated and angry. He implied the ethnicities and sexual orientation or gender identities of the Pulse victims made them less important than the Parkland victims in Republican lawmakers’ eyes.

“It seems like now Republican politicians in Tallahassee are tripping over themselves to demand investigations, special committees, resignations related to the Parkland shooting,” he said. “Where was their outrage after Pulse? How come they weren’t demanding the same things then?”

Black lawmakers have framed a related question: Why haven’t Republican legislative leaders done anything about the gun deaths that have plagued minority communities?

Rep. Roy Hardemon, a black Democrat who represents Liberty City, said he was offended by the Republican majority’s unwillingness to consider proposals from the House black caucus. If black lawmakers are silenced in the Legislature — with the exception of the one black Republican in the House — then the needs of black Floridians are not being addressed at the Capitol, he said.

“My voice was never heard,” he said.

As lawmakers debated new gun policies, “we never had the understanding that black folk in Florida is dying every day with AK-47s, those same AR-15s,” Hardemon said. “My grandson was murdered with a handgun.”

DuBose said there are 120 members in the House and therefore, 120 different life experiences, but only the Republicans’ points of view are taken into consideration.

“You couldn’t even imagine a day in our shoes because this is our reality," he said. "This is our fate.”

During meetings leading up to floor debate, Democrats sparred amongst themselves over whether to take a united stand against the bill. Black members wanted their white Democratic colleagues’ support. But some — like Rep. Jared Moskowitz, who represents Parkland — felt like they couldn’t go home to their districts with nothing after last month's shooting at Stoneman Douglas.

Moskowitz made an emotional pitch to his colleagues to vote for the bill because the families of the 17 victims asked them to. But first, he lamented the fact that children die in his colleagues’ districts all the time, and there’s no bill to try to stop that.

“Over the past 11 years, more than 300 children have been killed by guns in Miami-Dade County. That’s 17 Parklands,” he said. “We know we’ve done nothing for them. … The slow drip of children getting killed by guns day in and day out should be no different than when it all happens at once.”

Senate Democratic leader Oscar Braynon, who is black and represents Miami Gardens, offered an explanation for why everyday gun violence in minority communities hasn’t prompted action: The Parkland shooting victims “look more like [Republican leaders] than the ones that they see getting killed on TV that live in Chicago, that live in Detroit, that live in the inner cities of Orlando, Miami, Jacksonville, Tampa,” Braynon said.

“For many of the Republicans, when they saw [Stoneman Douglas victims] getting shot, they saw themselves in those people,” he said. “It’s hard for them to see themselves in the people in my community.”

Braynon said it’s wrong that it took a white, affluent community to be affected by gun violence for legislators to respond. But he hopes to use the moment to advocate for what his constituents need, too.

Take the $400 million included in the bill for additional mental health services in schools. With that funding, the Legislature is recognizing not only that more needs to be done to help troubled kids from turning into school shooters but also that the Stoneman Douglas students who experienced trauma and witnessed violence will need help to recover.

“Well, we have large numbers of children in our community that have those same fears every day."

Neither House Speaker Richard Corcoran nor Senate President Joe Negron responded to requests for comment for this article.

Florida Gov. Rick Scott has signed legislation tightening gun restrictions in the state. Among other things, the legislation raises the legal age for gun purchases to 21, institutes a waiting period of three days, and allows for the arming of school personnel who are not full-time teachers.

In a statement, Scott's office highlights mental health provisions in the bill:

The National Rifle Association has filed a federal lawsuit over gun control legislation Florida Gov. Rick Scott has signed, saying it violates the Second Amendment by raising the age to buy guns from 18 to 21.

In the minutes after a gunman opened fire in a Florida high school, killing 17, frantic students and parents begin flooding 911 with calls.